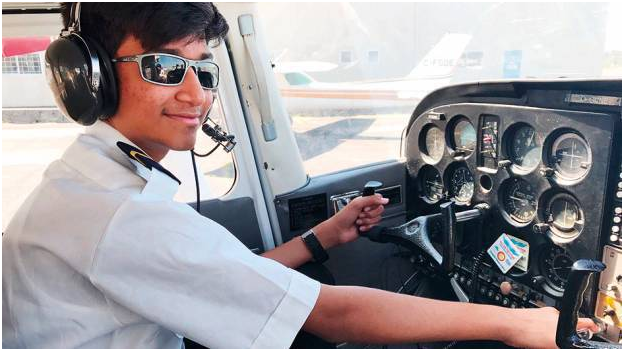 In the world of planes and crafts, one boy made his way and only at age 13 managed to fly a plane all by himself. You want to know his name?
Well, his name is MansoorAnis, and he is the youngest to fly a plane for 25 hours, therefore breaking the world record. His passion for planes came from his uncle, the pilot, and since he was a small boy, Anis wanted to know what’s going on with all those objects he used to see high in the air. His uncle made sure he knew the basis, but the simulation is not the real thing, and soon this talented young boy decided to take matter into his own hands, leaving for Canada with his mother in hope to become pilot sooner than later.
This dream Anis turned to be sufficient given the amount of knowledge he already possessed thanks to his uncle and Aviation Flight Academy in Langley accepted him as the student. The process itself wasn’t as hard given he impressed them with the amount of knowledge, but for Anis this was an adventure of the lifetime, and a dream come true.
Anis wanted to know the core of events, and the science behind it, and it wasn’t long before he got the chance to prove himself. As everyone, Anis admitted to being nervous before his first real flight, but in the deepest corner of his heart, proud of his achievement. Everything is possible when you’re ready to do something about your dreams, and this boy proves that the support of the family and a personal interest in the matter really help when it comes to something you love.
We wish him a successful career in this field and a life he dreamed of!