7 Things to Learn from the Prophet’s Care for Animals 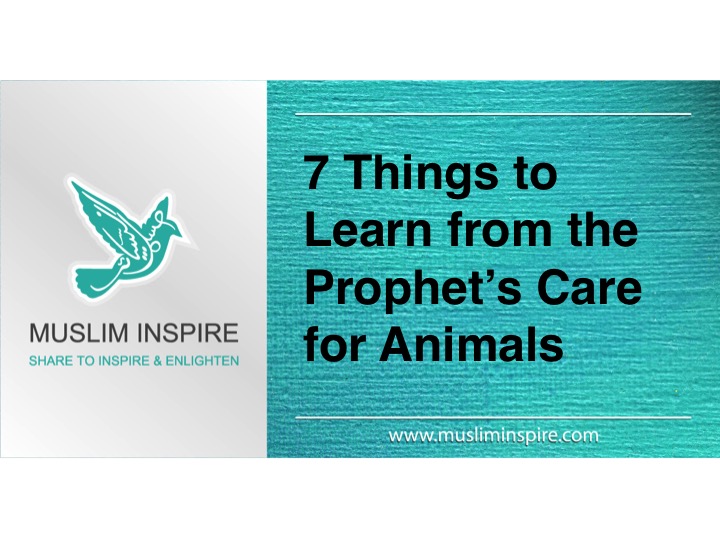 The Prophet came upon an emaciated camel and said:

2- Striking animals or branding their faces:

The Prophet passed by an animal which had been branded and its nostrils were smoking. The Prophet said:

Allah curses any person who does this. No one should mark the face nor strike it.’” (Al-adab Al-mufrad)

“The Apostle of Allah seated me behind him (on his ride) one day, and told me secretly a thing asking me not to tell it to anyone… He entered the garden of a man from the Ansar (Helpers). All of a sudden when a Camel saw the Prophet it wept tenderly producing yearning sound and it eyes flowed. The Prophet came to it and wiped the temple of its head. So it kept silent. He then said:

Who is the master of this Camel? Whose Camel is this?

A young man from the Ansar came and said:
“This is mine, Apostle of Allah.”
He said:

Don’t you fear Allah about this beast which Allah has given in your possession. It has complained to me that you keep it hungry and load it heavily which fatigues it. (Abu Dawud)

4- Reward for being good to animals:
The Prophet said:

A prostitute was forgiven by Allah, because, passing by a panting dog near a well and seeing that the dog was about to die of thirst, she took off her shoe, and tying it with her head-cover she drew out some water for it. So, Allah forgave her because of that. (Al-Bukhari)

5- Taking away small birds from their mother:
We were with the Messenger of Allah in a journey when he drew apart (to relieve nature). In his absence, we saw a red bird which had two young ones with it. We caught them and the red mother bird came, beating the earth with its wings. In the meantime the Prophet returned and said:

Who has put this bird to distress on account of its young? Return them to her.

He also noticed a mound of ants which we had burnt up. He asked:

Who has set fire to this?

None can chastise with fire except the Rubb of the fire. (Abu Dawud)

6- Shooting animals for play or exercise:
The Prophet said:

In another narration, he forbade “using anything with a soul as a target.” (An-Nasa’i)

7- Slaughtering animals with the minimum amount of pain:
The Prophet said:

Verily Allah has prescribed Ihsan (kindness) for everything. So when you kill, you must make the killing in the best manner; when you slaughter, make your slaughter in the best manner. Let one of you sharpen his knife and give ease to his animal (in order to reduce his pain). (Muslim)