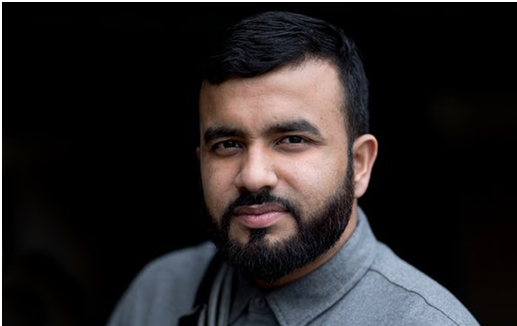 UK’s first Muslim astronaut aims to put focus on mental health. For most people who go into space it is a dream come true, but for the man set to be the UK’s first Muslim astronaut his priority is making the world a better place.
Hussain Manawer, 25, from Ilford, Essex, is due to blast off in 2018 after seeing off thousands of other entrants from more than 90 countries in a competition.
The poet, charity fundraiser and founder of his own creative agency dedicated his victory to everyone who has suffered mental health problems, and said he had an important mission in life.
“It’s never really been an ambition of mine [to go into space], but I felt I wasn’t contributing enough to the world,” he said. “I got to the point where I thought we are failing the world so much in so many different ways. When I saw the competition I thought: let me go for it, let me see what happens.
“I am using it as a platform to venture into problems, which is how I think it should be. What influenced me is you have to be somebody in order for people to take you seriously, in order to have an impact.
Manawer’s pitch for the Kruger Cowne rising star competition was centred on mental health, from his entry video to his final speech featuring a poem about depression and self-harm, in which he lamented: “I wasn’t meant for this planet.”
He plans to release a mixtape featuring his poetry about mental health, and in March he will attempt to set a world record for the largest mental health lesson, for 1,000 students from 30 schools from all over the country, at Hackney Empire in London.
Manawer is fully behind a campaign for schoolchildren to be taught about mental health, but believes teachers are under enough pressures and so need outside assistance.
Even before winning the space travel competition, Manawer had raised thousands of pounds for charities and given lessons on cyberbullying in 400 schools. He has a successful YouTube channel, Hussain’s House, featuring interviews with the comedian Kevin Hart, rapper G-Eazy and radio presenter Charlamagne, and was a torchbearer in the buildup to the London Olympics.
He said he saw the competition to travel beyond the 100km mark in XCOR Aerospace’s Lynx spacecraft as a way of taking his campaigning to another level. The contest was run in association with One Young World, a platform for 18- to 30-year-olds, supported by the likes of Kofi Annan.
“Never did I think I’m going to win it,” Manawer said. “I just thought if I can get through a few stages I get to be associated with some good humanitarians and they will take my stuff more seriously. There was Bob Geldof and Fatima Bhutto, who has done humanitarian work in Pakistan. I want to host meetings of global influencers to effect change.”
His public profile has soared since winning the competition. He fronted a launch video for London’s night tube, has rubbed shoulders with political leaders and royals and given talks around the world, all squeezed in between his astronaut training.
Manawer has also become a public face of Muslims at a time of increasing scrutiny of the faith. In his victory speech he declared: “My name is Hussain and I am not a terrorist,” an allusion to the hit 2010 Bollywood film My Name is Khan.
“Something triggered in my head and I thought: the world’s watching a Muslim person get an award, I want to say something meaningful,” said Manawer. “It’s good for people to see the positive side of a religion that gets missed a lot.”
At the same time, he does not want his religion to obscure his overriding message. “To me it’s very clear we are failing the world’s mental health,” said Manawer. “If we can tackle that, it will solve a lot of problems.”