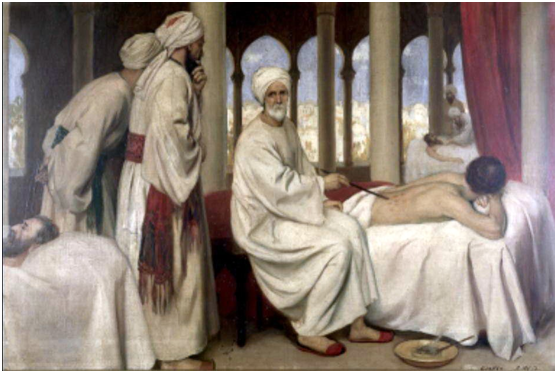 Abu al-Qasim Khalaf ibn al-Abbas Al-Zahrawi (936-1013 CE), also known in the West as Albucasis, was an Andalusian physician. He is considered the greatest surgeon in the Islamic medical tradition. His comprehensive medical texts, combining Middle Eastern and Greco-Roman classical teachings, shaped European surgical procedures up until the Renaissance. His greatest contribution to history is Kitab al-Tasrif, a thirty-volume collection of medical practice, of which large portions were translated into Latin and in other European languages.

Abu al-Qasim al-Zahrawi, known also by his Latin name Albucasis, was born near Cordoba in 936 CE. He was one of the greatest surgeons of his time. His encyclopaedia of surgery was used as standard reference work in the subject in all the universities of Europe for over five hundred years.

The Muslim scientists, Al-Razi, IbnSina and Al-Zahrawi are among the most famous of those who worked in the field of medicine in pre-modern times. They have presented to the world scientific treasures which are today still considered important references for medicine and medical sciences as a whole.

Abu al-Qasim Khalaf ibn Abbas Al-Zahrawi (known in the West as Albucasis) was born at Madinat al-Zahra near Cordoba in Islamic Spain on 936 CE and died in 1013 CE. He descended from the Ansar tribe of Arabia who had settled earlier in Spain. His outstanding contribution to medicine is his encyclopaedic work Al-Tasrif li-man ‘ajaza ‘an al-ta’lif, a long and detailed work in thirty treatises. The Al-Tasrif, completed about 1000 CE, was the result of almost fifty years of medical practice and experience. Here is how the author expressed his credo in this book:

“Whatever I know, I owe solely to my assiduous reading of books of the ancients, to my desire to understand them and to appropriate this science; then I have added the observation and experience of my whole life.”

Al-Tasrif is an illustrated encyclopaedia of medicine and surgery in 1500 pages. The contents of the book show that Al-Zahrawi was not only a medical scholar but a great practising physician and surgeon. His book influenced the progress of medicine and surgery in Europe after it was translated into Latin in the late 12th century, by Gerard of Cremona, and then afterwards into different European languages, including French and English. Al-Tasrif comprises 30 treatises or books (maqâlat) and was intended for medical students and the practising physician, for whom it was a ready and useful companion in a multitude of situations since it answered all kinds of clinical problems.

The book contains the earliest pictures of surgical instruments in history. About 200 of them are described and illustrated. In places, the use of the instrument in the actual surgical procedure is shown. The first two treatises were translated into Latin as Liber Theoricae, which was printed in Augsburg in 1519. In them, Al-Zahrawi classified 325 diseases and discussed their symptomatology and treatment. In folio 145 of this Latin translation, he described, for the first time in medical history, a haemorrhagic disease transmitted by unaffected women to their male children; today we call it haemophilia. Book 28 is on pharmacy and was translated into Latin as early as 1288 under the title Liber Servitoris.[1]

The 300 pages of the book on surgery represent the first book of this size devoted solely to surgery, which at that time also included dentistry and what one may term surgical dermatology. Here, Al-Zahrawi developed all aspects of surgery and its various branches, from ophthalmology and diseases of the ear, nose, and throat, surgery of the head and neck, to general surgery, obstetrics, gynaecology. Military medicine, urology, and orthopaedic surgery were also included. He divided the surgery section of Al-Tasrif into three part:

It is no wonder then that Al-Zahrawi’s outstanding achievement awakened in Europe a hunger for Arabic medical literature, and that his book reached such prominence that a modern historian considered it as the foremost textbook in Western Christendom.

SerefeddinSabuncuoglu (1385-1468) was a surgeon who lived in Amasia in central Anatolia. He wrote his book Cerrahiye-tu l-Hanniyye in 1460 at the age of 80 after serving for many years as a chief surgeon in Amasiya Hospital (Darussifa) for years. His text Cerrahiye-tu l-Hanniyye was presented to Sultan Mohammad the conqueror, but the manuscript disappeared afterwards until it emerged in the 1920s. The book is roughly a translation of Al-Tasrif of Al-Zahrawi, but Sabuncuoglu added his own experiences and brought interesting comments on the previous application, besides that every surgical procedure is illustrated in his work.

The oldest medical manuscript written in England around 1250 according to The British Medical Journal has startling similarity with Al-Zahrawi’s volume:

“This interesting relic consists of eighty-nine leaves of volume, written in beautiful gothic script in the Latin tongue. The work contains six separate treatises, of which the first and most important is the DE CHIRURGIA OF ALBU-HASIM [sic] (Albucasis, Albucasim ). This occupies forty-four leaves, three of which are missing. It may be contended that this really is the oldest extant medical textbook written in England.”[4]

Thus, in conclusion, Al-Zahrawi was not only one of the greatest surgeons of medieval Islam, but a great educationist and psychiatrist as well. He devoted a substantial section in the Tasrif to child education and behaviour, table etiquette, school curriculum, and academic specialisation.[5]

In his native city of Cordoba, there is a street called ‘Al-Bucasis’ named after him. Across the river Wadi Al-Kabir on the other side of the city, in the Calla Hurra Museum, his instruments are displayed in his honour. As a tribute, his 200 surgical instruments were reproduced by FuatSezgin and exhibited in 1992 in Madrid’s Archaeological Museum. A catalogue, El-legadoCientificoAndalusi, published by the museum, has good colour photos and manuscripts, some of which are on Al-Zahrawi’s achievements, legacy and influence.