Is body piercing permissible in Islam? 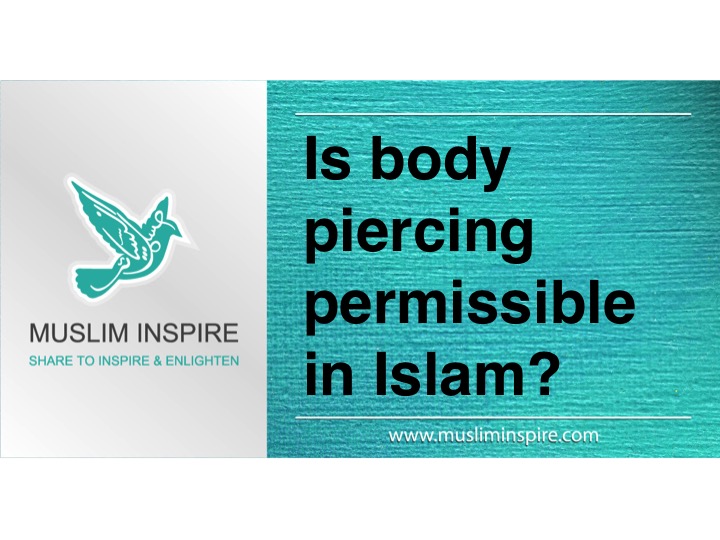 First of all, it should be made clear that it is permissible for women only to pierce their ears as a form of enhancing their beauty. The proof of this permission is based on the Hadith of Prophet Muhammad, peace and blessings be upon him, when he prayed on the day of `Eid and came with Bilal, his Companion, he ordered the women to pay Zakah, and some of them took their earrings off and threw it (donated it) to the Prophet. (Al-Bukhari)

As to the piercing of the nose, it isn’t allowed for both sexes because it is a type of deformation to Allah’s creation.

According to the teachings of Islam, our body – including all of our physical faculties – is a trust from Allah and we are required to protect and preserve it according to the best of our ability. Consequently, we are not allowed to alter or tamper with our physical faculties unnecessarily; we are only permitted to interfere with them in order to correct a natural deformity or repair or remedy an ailment. Any other form of interference or tampering with our body is akin to altering Allah’s creation, which has been condemned in the Qur’an.

We must also read the following statements of Allah in the Qur’an: “There is no altering Allah’s creation.” (Ar-Rum: 30); “And do not cast yourselves into destruction by your own hands.” (Al-Baqarah 2:195)

In light of the above, body piercing, tattooing, branding, etc. all fall in the category of unnecessary interference, alteration and mutilation of Allah’s creation. Therefore, no Muslim, who is conscious of his religion, should ever contemplate such activities.

The only exception some scholars and jurists have made in this context is the case of ear piercing specifically for females.

It is also worth mentioning in this respect that ear piercing is somewhat different; for there are fewer hazards in ear piercing as compared to piercing of tongues, lips and eye-lids, etc.

In conclusion: Body piercing for males is not at all permissible in Islam. Ear piercing has been permitted for females, according to some scholars. Such an exception, however, does not apply to males.