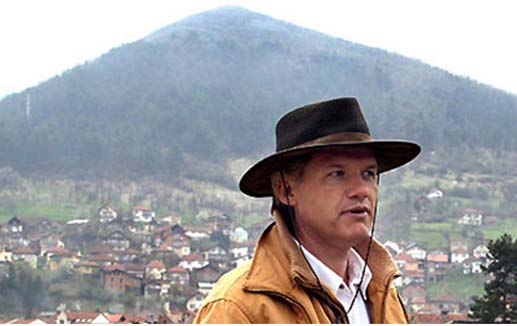 Bosnia and Herzegovina is a country where history is flexible, and each nation has its own version, but there is something that unites them all, the wish for better tomorrow, and there is a place in Bosnia that unites them all, small city of Visoko, and the village that, according to Dr. SemirOsmanagic, is the Valley of Pyramids, the oldest one in the entire world, but what this project shows is, not only that people believe that there is something here, but also the power of unity.

People from all over the world come to witness, as he tries to uncover, this ancient pyramid, and while you can check it out as he uncovers new tunnel every month, you too will question it.

As for Semir, this is not just a hobby, but rather a life work, and while locals hope to attract tourists, he simply hopes to leave a trace in this world, to prove that Bosnia, indeed, was not simply a cross sectionwhere Romans came first, but rather a place with a ancient meaning, and it may be unbelievable now, but if you by some chance have the opportunity to visit this place take it, as try to volunteer for a day, as you will find that it is rather an exquisite experience that most of the people neglect in favor of something else.

Bosnia is a place where the energy meets the local spirit, and while some even base their personal belief on that one, we may not share the opinion, but rather, in the light of our religion, consider this place to be a remainder for the living, that even if there was a great civilization here before, God wiped them out, and now he lets them be uncovered in a way to show that life is not just the time we spend here, but rather something that will surely pass, as what awaits after death is far more important and we should work on that one just as much, and even more.

The hope that remains is that all men will unite, conquer evil, and continue on for the brighter future, as war is not something we enjoy, but a peaceful living is definitely something we all aim for.