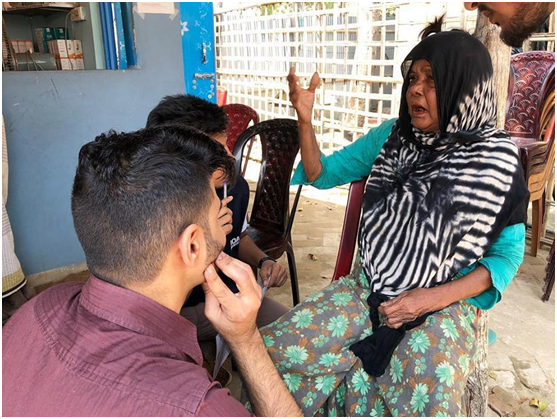 “Rain rain, go-a-way, come-a-gain some-o-ther day…”. I’ve heard this nursery rhyme before a few times, even sung it myself during the beast from the east that gripped Britain, but I’ve never heard it quite like this. In fact, it was this boisterous, broken-English chorus that greeted me last week, as I entered the UNHCR school next to the Rohingya Refugee camp in Shamlapur, Bangladesh.

It’s not actually raining, it’s sweltering 30-degree heat here, but there’s something to be said for the children’s miming actions that almost makes the words convincing. The terrible irony of the choice of nursery rhyme doesn’t escape my attention; the Rohingya refugees will face their first monsoon season in Bangladesh in a few days time and the threat of landslides, infection and more suffering looms.

The school visit is a happy coincidence, a burst of positive, youthful light in an overcast horizon. My wife and I – both London based GP’s – are in Bangladesh to volunteer with the UK-based charity Doctors Worldwide, delivering education and training to local Bangladeshi doctors and healthcare workers on the frontline. Having volunteered globally, the long-term approach of this project appealed to us; instead of working in the clinics for a few weeks at a time when leave would allow, we could serve the Rohingya by training and upskilling the local Bangladeshi doctors to deliver better standards of healthcare over the 6-12 months they are based here.

The trip began in a surreal way. Our plane journey to Cox’s Bazaar – an idyllic honeymoon destination for local Bangladeshis – consisted entirely of either newlywed couples, furtively holding hands, gazing lovingly at each other and taking endless selfies, and foreign volunteers who… were not. Even the atmosphere on the ground is strange – a mix of honeymooning carefree abandon, coupled with an undercurrent of unease, as if there’s more to this place than meets the eye. That’s because there is; under an hour’s drive from the centre of Cox’s Bazaar are camps housing almost a million Rohingya refugees, a stateless people from Myanmar, persecuted and killed in their own country, who have fled to Bangladesh for their safety.

This morning we are in the “small camp” of Shaplapur, which has only been in existence since August 2017, and yet is home to some 50,000 refugees. I am struck by how the camp is organised in a one-way logical flow to give the patients dignity with a registration/waiting room, emergency area, clinical area, pharmacy, and even a breastfeeding room for good measure. Todays clinic has a minor operations room that also masquerades as a major operations room, an examination room, a quarantine room and a birthing suite. It is smaller than the phlebotomy room in our surgery in the UK; what makes it special is it has a curtain for privacy. The facilities are scanty but the staff work diligently with caring smiles and speak to the Rohingya respectfully; it is all they can do to restore the dignity of a population who have suffered so much abuse. There are no fans and after a few hours I return to the waiting room to see how the patients are holding up in the 30 degree heat having travelled for 12 days without medical attention. Somehow the four-hour A&E wait back home doesn’t seem so terrible.

Over the next few days we visit other campsites, reviewing the layouts, and noting where improvements can be made. We have the chance to sit and observe consultations, utilising the opportunity to demonstrate how to improve history-taking and examination skills. With a translator – the Rohingya speak a dialect that requires translation – this can be a time-consuming and arduous process but we begin to see improvements and the doctors are receptive to our input. One of them, DrTareq, comments that our input has helped him to practically apply and interpret the learning he amassed,  improving his diagnosis and management skills, whilst making his consultations quicker. This is particularly important, given each clinic sees 200 patients per day on average split across 2 or 3 doctors.

It has been a challenging morning. We’ve heard harrowing tales; a mother described how she saw 200 infants beheaded, another how she saw young children being thrown on fires, burnt alive as she watched, helpless. Elderly patients describe how their sons were murdered in plain sight and how they “escaped with their lives”, carried for days by strangers. Children wander around, asking their mothers why their father hasn’t joined them, not knowing they never will. I have never heard such stories of inhumanity on such a grand scale, never considered a world where this could still go on without international intervention.

DrTareq, has been here for 6 months and tells me these stories are all true – he’s heard countless similar over the last few months. On the journey home I feel a pain in my heart that won’t leave me, that jolts tears that won’t stop flowing. My mind can’t fathom how this is happening: why is there no international outrage? Why have the words of the UN Secretary General describing this as “ethnic cleansing and clear genocide” not been heeded? After some hours spent curating the content for our teaching seminars later in the week, I go to bed, for what won’t be the last time on this trip, heartbroken that this is the state of 2018.