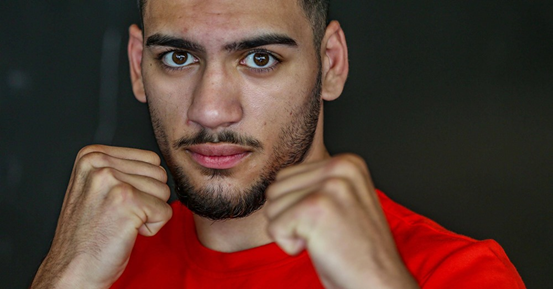 Born into a family of boxers, Sheeraz fell in love with the ring at the age of eight, when one of his uncles took him to a gym
When Hamzah Sheeraz, the WBO European super welterweight champion, tells you that he ‘loved getting punched in the face’ since he was eight years old, this British-Pakistani boxer makes one of Rocky Balboa’s most memorable dialogues, ring in your ears: “It ain’t about how hard you hit. It’s about how hard you can get hit and keep moving forward. That’s how winning is done!”

Born into a family of boxers, Sheeraz fell in love with the ring at the age of eight, when one of his uncles, who had his own successful boxing career, took him to a gym.“I loved the gym, I loved getting punched in the face. I just carried on doing that, the hardcore amateur fights, until I got the opportunity to turn professional. I grabbed it with both hands,” Sheeraz told Khaleej Times.

The 21-year-old Sheeraz stopped Argentinian rival Guido Nicolas Pitto in the 10th round of his last fight in November, to earn the 12th straight win of his career, months after one of his aunts lost her fight to Covid-19.

It was tough, emotionally for Sheeraz and his family, who has never stopped supporting him.

“I fought hard and that win has now put me in the top 10 of the WBO rankings,” said Sheeraz, who dedicated his latest victory to his late aunt.

With his ranking in the upward curve, Sheeraz is confident of reaching the pinnacle of his sport.

Sheeraz would not have reached where he is now if not for the inspiring story of fellow British-Pakistani Amir Khan, the former unified light-welterweight world champion and the 2004 Olympic silver medallist.

“Amir Khan was the first British Pakistani to actually open the doors for us to do something. What he did was very significant and he made it a lot easier for us to get the opportunities,” Sheeraz said.

“He has always encouraged me to do well. Good thing with boxers is that they relate. Having his support is amazing, especially for what he has done, you can’t beat it.”

And it was the fighter’s mentality that helped Hamzah beat the pandemic blues.

“Some of the fighters may have been affected, but because I am mentally strong, it didn’t affect me. In terms of training, of course, it was hard because the gyms were closed. I did my own training. I had to train at home. It was almost like being in a prison. But like I said, if you have a fighter’s mentally, nothing can really stop you. You would get to where you want to get, regardless of the situation. As a fighter, you have got to make the best of what you have got,” said Sheeraz before revealing why he admired mixed martial arts legend Khabib Nurmagomedov and tennis icon Rafael Nadal.

“Khabib is a massive icon. I just admire the way he has portrayed himself as a human being, but once he is inside the ring, he is a beast,” Sheeraz smiled.

“Then, obviously in tennis, I admire Nadal because he never gives up. He comes back from any situation. I love that spirit.”

So is Sheeraz a Floyd (Mayweather) fan or a Manny (Pacquiao) fan?

“Floyd,” he replied, in just one word.

But one couldn’t resist prodding this talented boxer to get his insight on this fascinating duel between a flamboyant American (Mayweather) and a large-hearted Filipino icon (Pacquiao) who keeps supporting the less fortunate in his country, where his rise from a poverty-stricken family to the pantheon of boxing immortals, has earned him a demi-god status.

“I admire Floyd boxing-wise. He’s too good technically. But outside the ring, it’s Manny for me any day for what he has done,” said Sheeraz.

“I wish Floyd and Manny had fought when both were at their prime. It would have been a better fight.”

Finally, the Slough-born boxer opened up about his own desire to fight in Dubai.

“It’s my dream to fight in Dubai. With the team I have got, everyone is here trying to help set up a fight, possibly at the Coca-Cola Arena,” said Sheeraz, whose team is hoping to bank on the large number of Pakistani expats in Dubai.

“I reckon within a year, I will fight a big fight here in Dubai!”