Can we give our baby a non Muslim or non Arab name? 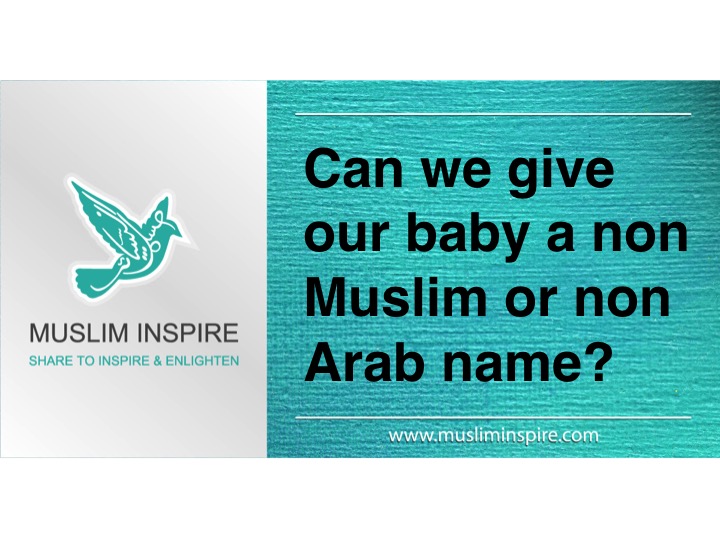 Islam emphasises that Muslims should have good names and give good names to their children. It is reported in a Hadith that the Prophet (peace and blessings be upon him) said, “You will be called on the Day of Resurrection by your names and the names of your fathers, so have good names.”(Reported by Abu Dawud)

“Children are a trust in the hands of parents. Parents, therefore, have a duty to receive this divine gift with a true sense of gratitude and do everything at their disposal to provide the best nurturing. There is nothing better they can do in this regard than by providing them a home filled with love and kindness, and thus contributing to their overall physical, intellectual, ethical and spiritual growth and development. Such a duty begins before the birth of the child and extends all through their lives. Having said this, I must say, that the first important duty when a child is born is to recite the adhan in the right ear in a gentle voice and give him or her a good name.

The duties assigned by Allah to parents include:

Islam does not oblige Muslims to choose specific names, Arabic or non-Arabic for their children, this is left for the parents,As for the choice of names, we are given the following guidelines:

“The most detestable name for Allah in the Hereafter is that of a man who calls himself “King of All Kings”, for Allah is the Lord of the Kings.”(Muslim)

In conclusion: There is nothing in the Islamic sources to indicate that we are allowed only to give our children Arabic names. Since Islam is a universal religion, there is no such requirement. Any name is acceptable and allowable, so long as we keep in mind the above points. But, at the same time, while choosing names, we should strive our best not to compromise our Islamic identity.”