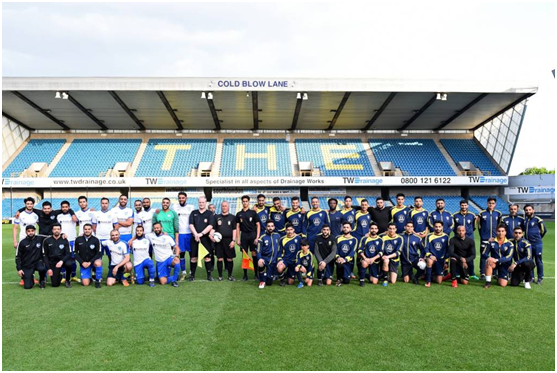 The MA Flamengo Charity Football Project has been running since 2005 and aims to unify communities and fundraise for the less fortunate through football.

“The idea came together after a one-off charity football match that grew with our slogan Unity Through Sports“, CEO Sahir Osman says. “The concept to kick a ball and change a life worked wonders and in a short time, we managed to attract teams from across the UK. To play football, raise funds then see the fruits at the end of the season was something special.”

The project has been extremely successful and has seen incredible participation.

It has brought together not just communities of all faiths, but also Muslims of all backgrounds and sects.

“The team is my community”, says Abu Shahbaz, manager of Hyderi FC. “The mosque is where I learn about my Lord, so giving back to my community is part and parcel of my worship.”

Hyderi FC met Flamengo FC on the field in a charity match that raised £3,000 alone. Abu Shahbaz saw first hand the positive impact participation had on his players. “We had a lot of animosity between the community – it happens in every community – playing as a team brought them together. The positive impact is the friendships it causes, the relationships it causes, we say our prayers together both Sunni and Shia – it was absolutely amazing.”

“Even in losing, we’re all winners – because we’ve raised money for those that need it most, by doing what we love”.

The unifying of Muslims of different backgrounds is a powerful message in today’s harsh climate, with some fringe groups attempting to preach sectarian strife. None of this exists on the pitch though. “We’re coming together and we’re realising that we have so much more in common”, the Hyderi manager continued, “and our differences are so little – we pray to One God, we bow in the same way, our prayers are the same, our book is the same… our differences are so small.”

“The unity, brotherhood, standing shoulder to shoulder, feet to feet for a common ground is really amazing”, Sahir agreed. “In today’s climate where divisions are fashioned by politics and the media, we need projects like these to unite communities together for greater good of humanity.”

The project began in 2005 under the slogan Unity Through Sports, with the aim of bringing teams and communities all across the country together with one common goal.

This year alone the tournament raised over £30,000, with the funds being used to support emergency appeals all around the world.

The projects supported by the tournament include a desalination unit in Gaza which provides 5,000 liters of clean water every day, a water well in Somalia, emergency appeals in Syria and Myanmar for the Rohingya as well as supporting 45,000 Palestinian and 5,000 Syrian refugees in Northern Lebanon.

Hyderi didn’t manage to defeat Flamengo, but that didn’t seem to phase them. “Even in losing, we’re all winners – because we’ve raised money for those that need it most, by doing what we love”.

The organisers and participants wish to see this replicated all over the country.