Engineers in Gaza convert the rubble 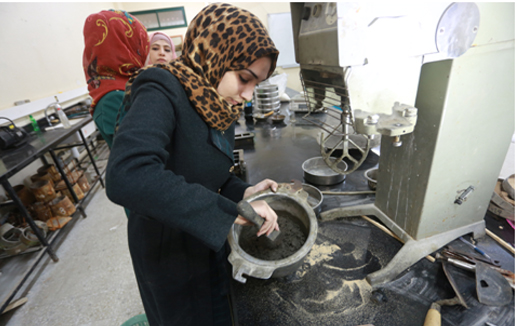 Engineers in Gaza convert the rubble

An all-female team of engineers in Gaza have invented an affordable new way to produce concrete from the leftover rubble of homes destroyed during the last war in Gaza. And the four women behind the project–Nour Buhaisi, Aya Abu Hashish, Rahma Ashour, and Angham Elmadhoun–are challenging stereotypes along the way.

The women want to scale their operation for mass production and are looking to get a contract with a private company or a non-governmental organization. They aspire to create a needed alternative to the expensive and time-consuming process of importing construction materials into Gaza by relying mostly on recycled materials.

The first time the engineers made their formula they were still students pursuing their undergraduate degrees. After 11 months of scientific experiments, they finally made this first sample by gathering 44 pounds of glass and crushing it in a laboratory at the Islamic University of Gaza, in Gaza City. The glass was mechanically ground for 15 hours, yielding a very soft powder. Then, they combined it with cement, silica fume (a silicon-based material), crushed concrete blocks and fly ash made from spent coal. The mixture was then compacted under high pressure.

To their surprise, the engineers produced a durable concrete on the first try.

“We were determined to find a practical project, not to remain dead in the water in a back corner of our university’s library.” Buhaisi said, “we intended to make environment-friendly cement and we produced double the strength of regular cement, so we killed two birds with one stone.”

In Gaza, cement is a scarce resource. Buhaisi told Mondoweiss this is because of 11 years of the blockade. The cement deficit if further compounded the last war. And the wreckage has deprived some 40,000 workers of employment in the construction sector.

After the last assault on Gaza in 2014, the United Nations estimated 120,000 residential units were destroyed in full or in part. Of them, 71,000 are already rebuilt and construction is underway on an additional 12,000. Over 57,000 housing units still need to be rebuilt and not all of the rubble from these destroyed homes has been cleared.

“In any neighborhood, you might find dozens of hills still littered with free-standing crushed concrete blocks and wide areas scattered with broken glass. The fact that the glass is a not an eco-friendly component [to produce], made us feel that our project is an increasingly bright idea,” Buhaisi added.

The female team said they hope to speed the pace of reconstruction. Rebuilding could take a century, according to a Feb. 2015 Oxfam report that said, “At current rates, it could take more than 100 years to complete the essential building of homes.”

In part, rebuilding is stalled due to Israeli restrictions on the import of cement. Israeli regulations limit so-called “dual use” substances from entering Gaza. These include building materials that are used for homes, but also have potential to build tunnels or an underground cache of weapons.

After the 2014 war in Gaza, imports of construction materials were further limited by the United Nations-brokered Gaza Reconstruction Mechanism (GRM), and agreement between the Palestinian and Israeli governments. The GRM caps and monitors imports of cement and reinforcement bars–also called ABC materials. When possible violations to the deal occur, Israel can freeze imports.

Last April Israel suspended all private sector cement imports into Gaza’s for 45 days. At that time Israel had said Hamas was siphoning cement off for military purposes. Still, international organizations were allowed continue to their cement shipments, where Israel permitted around only 3,500 to 4,000 tons of cement to enter Gaza per day, which is a small amount when weighed against the urgent need.

After the last war, UNRWA found a total of 1.5 million tons of concrete was needed to rebuild Gaza.

The female engineers saw the burden the GRM imposed on Gaza’s homeless and wanted to bypass the chain of obstacles most Palestinians face. “We aimed to help our people to rebuild their destroyed houses after three wars in a decade, which left thousands of buildings flattened,” Buhaisi said.

Buhaisi added her project will solve a related problem in Gaza: the lack of landfills, specifically what to do with tons of non-biodegradable glass. Her team has a use for glass waste as a base material for the new concrete. Larger scale production could improve the local visual landscape.

As for fly ash, another main material in the concrete recipe, the engineers collected it by asking the local restaurants if they could take cinders from their grills. This sparked many curious questions from barbecue owners.

“Restaurant owners were wondering if the cement will be a ‘barbecue blend,’ and joked that tiny steaks would appear inside of concrete walls,” Buhaisi said.