#HAJJ 2017, OVER 1.2 MILLION MUSLIMS ARRIVE FOR PILGRIMAGE TO MECCA 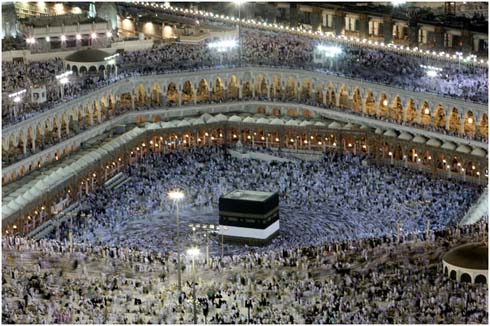 Every year, the Islamic calendar dictates the dates of a global pilgrimage known as Hajj, which draws millions of followers toward their faith’s holiest site. This year’s journey is only days away.

Unlike the standard Gregorian Calendar, which is based on a 12-month pattern set to the sun’s movements, the Islamic or Hijri Calendar is determined by the moon. Hajj occurs between the Islamic dates of Dhu al-Hijjah 8 and 12, but these dates shift annually on the Gregorian Calendar due to differences between the solar and lunar cycles. This discrepancy also means Hajj occasionally occurs twice in one year, as it last did in 2006.

This year, Hajj begins on the evening of August 30 and ends on the evening of September 4 in EDT (seven hours behind the time in Mecca, where it begins August 31). These dates were officially announced Tuesday by Saudi Arabia’s Official High Court after astronomers and other witnesses reported the first signs of a new moon crescent.

“There has been a confirmed sighting of the crescent of Dhu al-Hijjah. Tomorrow, Wednesday, will be the first day of Dhu al-Hijjah,” the official Saudi Press Agency cited the kingdom’s top court as saying.

The agency also reported Tuesday that more than 1.2 million pilgrims had already arrived in the kingdom by air, land and sea, a 27 percent increase from last year, according to the country’s passports directorate. Performing Hajj at least once during one’s lifetime is one of the five mandatory pillars of Islam and worshippers have already begun preparing for Hajj by attempting to enter into a state of mental and physical holiness, according to Islamic tradition. Once prepared, pilgrims travel to the Grand Mosque of Mecca to commence the five-day rituals.

On the first day, pilgrims enter the Grand Mosque of Mecca and circle the Kaaba in prayer (tawaf). The Kaaba is a rectangular building considered by Muslims to be the house of God (bayt Allah) and followers face its direction (qibla) five times a day when praying anywhere around the world. Pilgrims then run seven times through tunnels running back and forth between the nearby hills of Safa and Marwah in a ritual called sa’ay. On the next day, known as the Day of Hajj, worshippers travel more than a dozen miles away to the barrens of Arafat to confess their sins while symbolically standing before God in a ritual called wuquf.

The third day of Hajj, which falls on the Islamic feast of Eid al-Adha, is dedicated to the symbolic ritual of stoning the devil (shaytan), who is represented by the largest of three pillars (later converted into walls) in the eastern neighborhood of Mina. Pilgrims are also asked to cut their hair and either slaughter an animal themselves, oversee the sacrifice or buy a voucher ensuring that an animal is sacrificed somewhere else to later be distributed for charity. They then return to say additional prayers while circling the Grand Mosque in Mecca and later once again to Mina to stone all three pillars before performing final farewell prayers (wadaa) around the Kaaba and exiting the city.