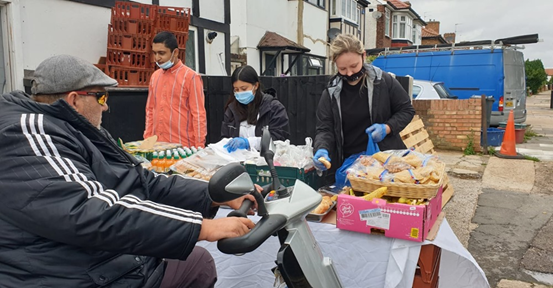 A volunteer worker at a Hounslow community kitchen who was diagnosed with stage four cancer continues to deliver food to those who need it.

Sunny Kharbanda was contacted in early April by the Government to advise that due to his illness, he is classed as clinically extremely vulnerable and that he should immediately shield.

Kharbanda began volunteering with charity Muslim Hands’ The Open Kitchen in January and considered giving back to his community a life changing experience.

He said: “I was devastated that I may not be able to continue making a positive difference to the lives of so many that were in need in these unprecedented times. After consulting with my doctor, it was agreed that I would be allowed to leave my home just to continue my volunteer work.

“I am immensely proud to have made of positive difference to the lives of so many people, not just personally, but the collective efforts of the strong team of volunteers which has really helped hundreds if not thousands of residents in these tough times.

“I strive to continue helping and making a positive difference to the lives of those in our local and wider community.”

During the first national lockdown, Kharbanda volunteered at the Open Kitchen seven days a week, delivering hot meals and basic essentials to the elderly, those who were vulnerable as well as those with disabilities.

He continued beyond the initial lockdown being lifted and continues to volunteer not only at the Open Kitchen, but other charities in his local community such as Hounslow Soup Kitchen and ‘Food with Love’.

Kharbanda began to notice that people living alone in particular were really feeling the effects of isolation and the pandemic.

He said that sometimes being the only smiling face a person saw every day gave him a feeling of being relied on, and he felt he built a strong rapport with many of the residents who he was helping.

He added: “Sadly, I had to experience people with underlying health conditions pass away, as well as many people struggling with the mental health aspect of the situation.

“I would love to be able to inspire others to not only give back to their community in these strange times, but also highlight the importance of blood and plasma donations to help save lives, especially with Covid.”

The Open Kitchen provides hot meals for anyone who is facing food poverty, including low-income families and the homeless.

Since Covid they have had to move the service to delivery but remain open seven days a week, serving approximately 100-200 people a day.

The kitchen have also started a new service of bike donations to help the homeless stay active during lockdown and beyond.

Founder of the kitchen Ehsan Choudhry said: “I saw so many people hungry, and always asking for money on the high street. I felt I had to set up something. I serve over 200 meals a day today and also provide deliveries.”

Seema Malhotra MP said: “I have seen the work of Open Kitchen since its launch and have been inspired by the work of the charity and volunteers in serving local people. Its vision for the community of a place to meet and a place to share regardless of who you are has changed the lives of many. Through Covid, it has been a lifeline.”