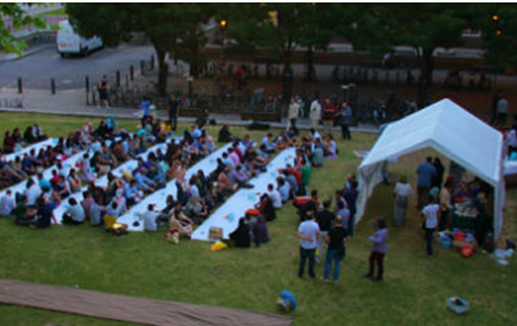 Ramadan Tent Project, an award-winning student-led project founded by both Muslim and non-Muslim students at SOAS, University of London is spreading to Manchester and establishing a global reach as it launches in Turkey and Zambia for its second year.
Starting on 28 June 2014 – the beginning of Ramadan – the Project marks the holiest month of the Islamic calendar. The aim of Ramadan Tent Project is to provide people with a better understanding of the spirit and essence of Ramadan, also known as Sawm, and create greater cross-community cohesion and understanding. The student-led initiative invites the public, SOAS students and staff, and the homeless to share the breaking of the fast, known as iftar, each day.
This year, the London-based Project will take place at Malet Street Gardens, near the main SOAS campus at Russell Square. The Project in Turkey will take place in Istanbul Sehir University and the locations in Manchester and Ndola in Zambia are due to be confirmed shortly.
A range of speakers from across media, sport, academia and charity organisations, including British journalist Mehdi Hassan, Julian Bond from the Christian Muslim Forum and Director of SOAS Professor Paul Webley will be taking part.
Last year the student-led initiative attracted considerable media attention with BBC Radio 4, BBC News, BBC Arabic, Times Higher Education, Guardian and Huffington Post as well as international press, including Geo TV in Pakistan, Sudan Vision Daily and Islam Online. Founder and Director of Ramadan Tent Project and SOAS PhD Nohoudh Scholar Omar Salha, was also featured on Channel 4’s Ramadan Reflections.
As a result of its success, the Ramadan Tent Project won the Student-Led Volunteer Project of the Year award in the 2014 Make a Difference Celebration earlier this year, organised by the SOAS Volunteering Unit and SOAS Student Enterprise.
Salha said: “We are very excited to be delivering this project for a second year, particularly after last year’s phenomenal success. Ramadan Tent Project is a place where people from all walks of life come together and feel part of an extended family. Importantly, the event will provide a platform for discussion and public engagement among Muslim and non-Muslim communities.
“No matter how tough or impossible an idea or concept can be, through dedication, perseverance, hard work, team-work and resolution based on firm values and principles, that idea can be transformed into a long-standing legacy and philosophy. We are excited to be launching the Ramadan Tent Project on an international scale this year and look forward to developing it further in years to come.”
The Ramadan Tent Project is supported by the SOAS Students Union, SOAS Development and Alumni Relations, SOAS Islamic Society, Islamic Relief UK, Muslim World League London Office, University of London, the Islamic Cultural Centre and St.Mungo’s Broadway. The organisers have also been in touch with homeless shelters in Central London who they hope to invite during the month of Ramadan.