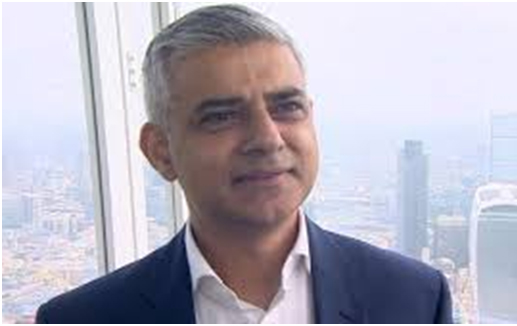 Sadiq Aman Khan born 8 October 1970 is a British politician who has been Mayor of London since May 2016. He was the Member of Parliament (MP) for Tooting from 2005 to 2016. A member of the Labour Party, he is situated on the party’s soft left and has been ideologically characterized as a social democrat.
Born in London to a working-class British Pakistani family, Khan gained a degree in Law from the University of North London. He subsequently worked as a solicitor specializing in human rights and chaired Liberty for three years. Joining Labor, Khan was a Councillor for the London Borough of Wandsworth from 1994 to 2006 before being elected MP for Tooting in 2005. Under the Labor government of Prime Minister Gordon Brown, he was appointed Minister of State for Communities in 2008, later becoming Minister of State for Transport. A key ally of Labor leader Ed Miliband, he served in Miliband’s Shadow Cabinet as Shadow Secretary of State for Justice, Shadow Lord Chancellor, and Shadow Minister for London. His grandparents migrated from India to Pakistan following the partition of India in 1947, and his parents migrated to England from Pakistan shortly before Khan was born. His late father, Amanullah Khan, worked as a bus driver for over 25 years; his mother, Sehrun, was a seamstress.
Contributions / Achievements:
Khan was nominated for the Politician of the Year Award at the British Muslim Awards (2013 & 2015). He later won the award (2016).
Khan was elected Mayor of London mayoral election (2016).

Influence & Impact on the community:
Khan was born at St George’s Hospital in Tooting, South London, the fifth of eight children (seven sons and a daughter) in a working class Sunni Muslim family of Pakistani immigrants. Labor’s Sadiq Khan has become the first Muslim mayor of London. Khan had said he would make solving the London’s housing crisis a key priority, and place a freeze on public transport fares for four years. He said he would set a target that half of all new homes should be “genuinely affordable” and promised to boost landlord licensing, as well as name and shame rogue landlords. Oxford Street would be pedestrianized and the capital’s air quality would be restored to legal and safe levels. However, he upset many Muslims by opposing boycotts of Israel, pledging to hold a Tel Aviv festival and questioning Muslim women who wear the hijab and niqab.