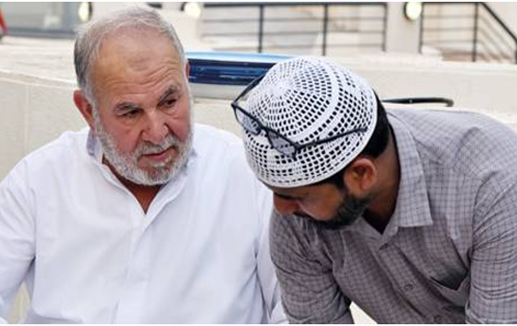 Abu Dhabi: A 69-year old Palestinian man, who still grieves the death of his son two decades ago, finds solace in performing good deeds in Ramadan, which are dedicated to his son’s memory.
Nazmi Mohammad Mahmoud cannot forget the year 1996. His most painful memory belongs to this year when his son, Haisam Nazmi, then aged 18, died in a car accident. It was during the Ramadan of that year when he began donating free iftars to around 300 people near his apartment off Hamdan street in Abu Dhabi. And he has been maintaining the charitable outreach since then.
“I have been doing this for my son who may receive good rewards from Allah,” said Mahmoud, while distributing iftar on Sunday evening.
He said many people, especially workers, always thanked him for his good deed. “When they say they too pray for my son, I feel gratified,” he said.
K.A Usman, 48, an Indian who has been running a shop in the vicinity for 30 years, said he had been regularly having Iftar with Mahmoud since he started offering it in 1996. “I come here regularly because of his love and warmth. He treats everyone like a brother,” Usman said.
By 6pm, many people turn up as volunteers to support Mahmoud in arranging Iftar.
For Mohammad Tariq, 23, a Pakistani businessman who grew up in the neighbourhood, helping with the distribution of Mahmoud’s iftar is a regular activity during Ramadan. “I started doing it since I was seven or eight years old,” he said, as he spread a sheet on the roof of the underground parking space of the municipality where the iftars are held, readying for the arrival of the guests.
Ibrahim Kunhi Moolakkadath, 45, another Indian shopkeeper, has been offering his time and effort for Mahmoud for the past 15 years. “I am happy to help him in his good cause,” Moolakkadath said.
Sarwar Wadud, 33, a Bangladeshi salesman, said the quality of food served by Mahmoud is a matter of praise. “People come from other neighbourhoods [for the iftar] because they cannot get such food anywhere else,” Wadud said.
For the iftar, Mahmoud arranges chicken or mutton biriyani from a restaurant and distributes it along with dates, water, laban and juice. He said he spends around Dh2,000 every day.
Mahmoud is a retired employee of the Ministry of Foreign Affairs and International Cooperation.
His daughter and three sons also support him.