A Muslim man took to the streets 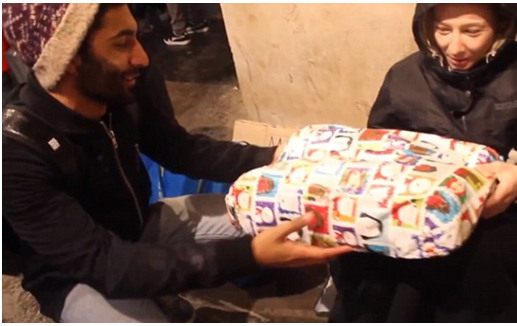 A Muslim man took to the streets

A Muslim man took to the streets with a handful of Christmas presents and gave them out to homeless people in a bid to promote equality.
London-based vlogger Nubaid Haroon, who posts videos to his YouTube channel Rambo Vlogs, documented his heartwarming mission in a short clip.
The footage shows Nubaid writing one of the many Christmas cards he later distributed to the homeless people he encountered on the cold streets.
The cards read: ‘Christmas is for everyone! This year, you have a friend in me. Spread Love. Rambo.’
The kind-hearted man later addresses the camera. He says: ‘I don’t really celebrate Christmas to a huge extent, obviously because of my background.
‘But at the end of the day when Christmas comes around everyone gives out presents and it’s the thought that counts.
‘But I think sometimes we forget that some people aren’t that fortunate to be able to spend Christmas with people they love.
‘And I think subconsciously I have been trying it, I think as people we need to try it a little bit more to spread equality.
‘It does not matter about someone’s race, job title or gender, at the end of the day they’re a human so today I just want to go out and put a smile on someone’s face. After all, it is Christmas time.’
The first person Nubaid encounters is a man called Teddy, 47, who has been homeless for 12 years after losing his job and family.
He is noticeably touched as he reads the words inside his Christmas card before opening his present and pulling out a warm blanket.
Other people Nubaid encounters on his trip include Catherine, 61, who has been homeless for 21 years after her husband left her, and Jon, 24, who has been on the streets for six months.
Nubaid also hands presents to Kelly, 28, and David, 28, as well as a number of other people who are not identified by name in the clip.
The presents, which are warm and soft blankets, bring visible smiles to the faces of all the homeless people surprised by the act of kindness.
The video concludes with Nubaid rounding up the day with a few words. He says: ‘I think this has definitely been the craziest and most satisfying thing I have ever done on Christmas.
‘Some of the people out here don’t deserve to be out here. They’ve been mistreated, something’s gone wrong for them and life’s just taken a turn for the worst.
‘But at the end of the day it is Christmas and equality has to win.
‘But hopefully I have made a few people smile on the streets and hopefully people will feel like they have got a friend in me this Christmas.’