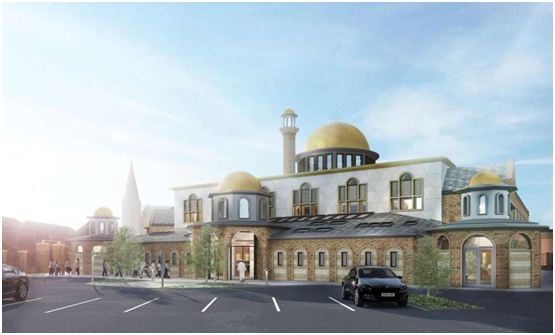 BOLTON – Work has begun on a new mosque in Bolton, with developers revealing images of what the new building will look like, The Bolton News reported on July 11.

The Taiyabah Islamic Centre will be an expansion for the current Taiyabahmosque which was built in 1967, but is now running at maximum capacity.

The new purpose-built facility will serve over 1,500 worshippers and include 18 classrooms for children’s education and to host community programmes. The scheme also incorporates a mortuary for funeral services.

“The design of the new building had been developed after working with the community. Community involvement was key to unlocking this architectural solution and we attended various open days and study trips to really shape the scheme into what was required,” David Cox Architects firm which builds the new mosque in cooperation with the project’s main contractor, Brook Williams Group, said in a statement.

“The resulting design focuses on flow and simple, yet inspiring, spaces with an impressive frontage on a very busy road in Bolton,” the statement read.

InayatOmarji, one of the Taiyabahproject leaders, added: “It was always an aspiration to create our own flagship development in the heart of our community in the Crompton ward of Bolton.”

“The team at David Cox Architects showed a thoughtful understanding of Islamic architecture and their willingness to listen closely to the requirements of the community resulted in a design which has exceeded our expectations. We are now focused on progressing with stage one of the construction phase,” he added.

The first recorded mosque in Britain was established in a Georgian terraced house in Liverpool in 1889. It wasn’t founded by Muslim immigrants but rather by a group of 20 English converts to Islam led by a local lawyer named Abdullah William Quilliam.