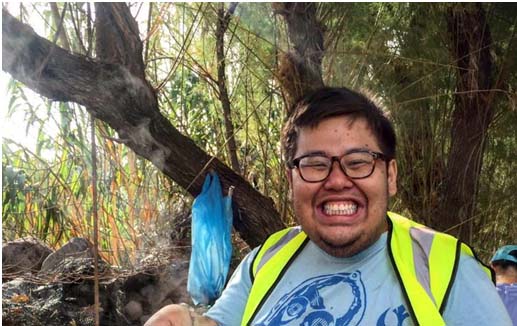 Rayyan, who’s a university dropout has been volunteering since 2013. His first volunteering stint was in the Philipines after Typhoon Haiyan struck.

He’s currently based in Lesbos, Greece – serving food to Syrian refugees scrambling to cross over to Europe from Turkey

Deeply troubled by the plight of refugees, Rayyan flew all the way from Malaysia to open a kitchen to serve them

“I flew all the way from Malaysia to open a kitchen here for the refugees,” Haries tells Mashable when able to steal a second away. “These people have gone through the extreme. You know, it doesn’t take much to feed a person, I just want to cook for people.”

With a makeshift kitchen, Rayyan and his group of volunteers serve up to 2,000 refugees a day!

Haries operates a modest makeshift kitchen in SkalaSikaminea, a small coastal village on Lesbos island that receives upwards of 2,000 refugees a day. Volunteers under his command — though he shies away from being seen as any form of boss — ensure everyone is treated with respect and dignity.

The first taste of Europe for those lucky enough to land near him after crossing the Aegean in boats organized by smugglers in Turkey, is hot tea, sweet enough to resemble the tea they drank in their homes before they fled.

Rayyan’s enthusiasm for cooking is infectious. Earlier this year, he auditioned for a place in Masterchef Asia.

Although he didn’t make it through the audition, he’s clearly a man with a passion and love for cooking, as you can see in the video above. Plus, that lasagna looks absolutely delish!

Always with a smile, Rayyan is often seen dressed in colourful outfits serving his famous soup-of-the-day made with ingredients from KL

Haries’ enthusiasm for cooking is infectious, his altruism unwavering. His sweaters are loud, colorful woolen garments that match in eccentricity the animal-themed hats he often wears to lighten the mood. His soup-of-the-day is served in styrofoam tumblers and includes local vegetables and spices he brought from his home in Kuala Lumpur. Bringing a smile, along with some hot tea and soup, has become his simple daily mission.

Calling himself #TheVolunteerCook, Rayyan gave up his plans to study culinary arts after seeing the lifeless body of AylanKurdi on the news

When asked what brought him to Lesbos, Haries tells of relinquished plans to study Italian cooking in Rome and tears up recalling the moment he saw AylanKurdi’s photo in the news, the Syrian toddler whose small body washed up on a Turkish shore in September. “He was the size of my nephew. He could have been my nephew,” he says.

Since then, Rayyan has seen the Greek tragedy first-hand and it’s really saddening

He’s seen the horrors of the Aegean first hand, and it’s saddening he admits. But being a witness to the Greek tragedy that plays out daily on Lesbos spurs him on. The short, yet deadly passage across the Aegean Sea claims the lives of refugees regularly, seeing a recent spike since winter weather is setting in.

Ultimately, Rayyan believes food is a source of happiness. It gives hope to people. He has started cooking Middle Eastern food – to remind the Syrians of home in a positive manner

“It may not be as good as they make it back home,” he laughs, “but I want to remind people of back home in a good way.”

You’re a real inspiration to us, Rayyan! We wish you all the best!