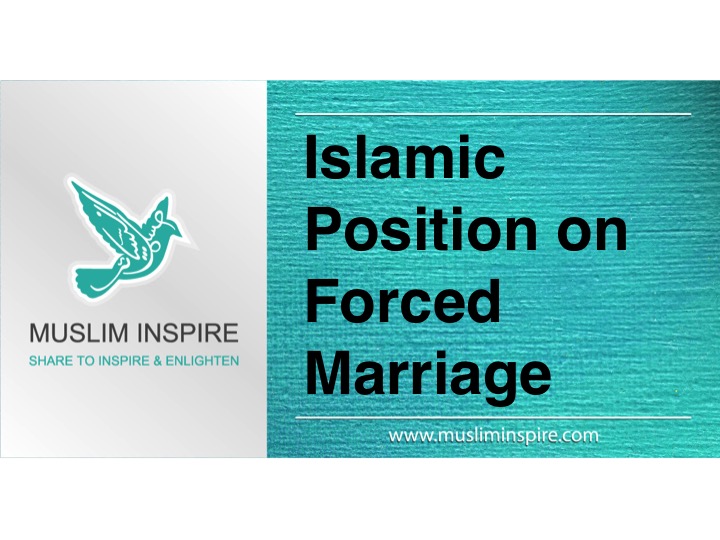 Some forced marriages take place in the United Kingdom with no overseas element. However, other cases involve one of the parties coming from overseas to Britain to marry against their will or a British citizen being forcibly sent or tricked into going abroad to marry where the individual does not consent to the marriage.

Islamic position on forced marriage
Forced marriage is not allowed in Islam. Both the groom and the bride must consent to the marriage. The consent of the woman is essential, and must be obtained, and any marriage which is forced is considered to be batil or void.

“O ye who believe! Ye are forbidden to inherit women against their will. Nor should ye treat them with harshness……(4:19)

There are also hadiths (traditions based on reports of the sayings and actions of the Prophet Muhammed, peace be upon him) that provide evidence that forced marriage was not allowed:

Example 1
Narrated Abdullah ibn Abbas: “A virgin came to the Prophet (pbuh) and mentioned that her father had married her against her will, so the Prophet (pbuh) allowed her to exercise her choice. (Translation of Sunan Abu-Dawud, Marriage (Kitab Al-Nikah), Book 11, Number 2091)”

Example 2
Khansa Bint Khidam said “My father married me to his nephew, and I did not like this match, so I complained to the Messenger of Allah (May Allah bless him and grant him peace). He said to me “accept what your father has arranged.” I said “I do not wish to accept what my father has arranged.”
He said “then this marriage is invalid, go and marry whomever you wish.” I said “I have accepted what my father has arranged, but I wanted women to know that fathers have no right in their daughter’s matters (i.e. they have no right to force a marriage on them). (Fathul Bari Sharah Al Bukhari 9/194, IbnMajahKitabunNikah 1/602).

Laws in a number of Muslim countries (e.g. Algeria, Bangladesh, India, Iraq, Jordan, Morocco, Pakistan, the Philippines, Syria, and most Malaysian states) prohibit forced marriage. For a list of countries that have banned forced marriage, refer to Knowing Our Rights by Women Living Under Muslim Laws [www.wluml.org/node/588]. Therefore, whether a person was married in Pakistan or the UK, both countries’ laws would regard a forced marriage as liable to be dissolved.

Those who force individuals to marry often justify their behaviour as protecting her or him as well as preserving cultural or religious traditions. Forced marriage cannot be justified on religious grounds: every major faith condemns it. Some commonly experienced reasons for forced marriages include:

• The notion of “family honour”
• Attempting to strengthen family links
• Ensuring land, property and wealth remain within the family
• Preventing relationships considered to be “unsuitable” for example outside a specific ethnic group
• Assisting claims for residence and citizenship
• Controlling unwanted behaviour and sexuality (including perceived promiscuity, or being gay, lesbian, bisexual or transgender)
• The need to provide a carer for a person with mental and/or physical disabilities
No matter what the justifications, forced marriage is a form of abuse and breaches internationally recognised human rights standards.