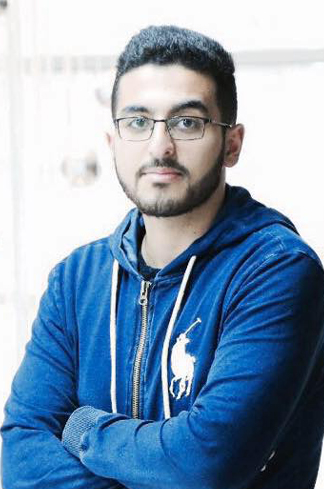 My chosen Ayah: “Verily, the noblest of you in the sight of God is the one who is most deeply conscious of Him. Behold, God is all-knowing, all-aware.” – (Al-Hujurat 49: 13). I chose this Ayah for it clearly shows that Islam pays no attention to differences in color, gender, origins, or social status. All people belong to the same origin; Adam and Adam were created from dust. Rather, people are different from each other by their faith and piety, and that’s the only difference that Islam cares about. Therefore, we can see that Islam is in no way based on racism or sexism.

As a Muslim living in Gaza, and seeing the horrible economic situation increasing, I had to fulfill my part in doing the good deeds. And since Islam taught me to help those in need, I decided to start a voluntary team, consisting of me and my colleagues- the RBCs team; referring to Red Blood Cells which mainly help in the process of recovery of the human body, and we wanted to be the real-life representation of them. We were motivated by Thawab (spiritual merit) and the prayers of the people to whom we gave our helping hands. The beginning was tough, but so are all beginnings. We were blessed to have supporters and other seekers of goodness. Now, our team is well-established and well-known in the community. If I had the chance, I would not hesitate to widen our work and to include more Palestinian cities or to have a network of communication with other college students in the West Bank. However, unfortunately, we are unable to do that due to the siege that Gaza has been under for more than a decade. It deeply affects us, as young people, the way Western societies view us. It actually puts more burden on our shoulders. We are viewed as terrorists, delusional, untrustworthy, etc. And most likely, one would find these kinds of views in someone who had never interacted with a Muslim and had never had the chance to know what Islam really is. Therefore, one of my wishes is for people to actually dig into the roots of Islam, the real Islam, not the Islam conveyed by the media that strives on making Muslims look bad for mere political purposes. Islam is all about peace, forgiveness, and patience. And I believe that Muslims worldwide should all work together in better understanding to their own religion so that they can help to convey the true message of Islam, and have people accept us as the people we are. These false images on Islam made by the minority of Muslims; they’re even less than minorities, may I say- who have radical perspectives should never represent the millions and millions of Muslims around the globe.