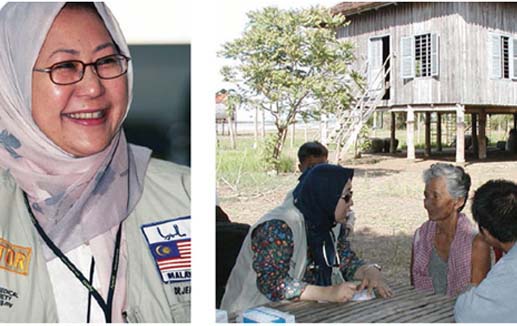 DrJemilahMahmood and her team were on their way to deliver medical supplies to a children’s hospital in Iraq when they were trapped in a crossfire.

Two people died, another two doctors were injured, and DrJemilah was shot in her hip.

“I was shot through a friend, Dr Baba – he was more injured and he took the bullet for me,” DrJemilah, founder and former president of MERCY Malaysia told Australia’s Sydney Morning Herald in an exclusive interview recently, in conjunction with World Humanitarian Day.

The bullet had gone through her friend and a thick Reader’s Digest book before hitting DrJemilah’s hip. She stitched herself up, left the bullet in, and got Dr Baba on the operating table – crying and wondering if she made a grave mistake dragging her team from MERCY Malaysia through a war-torn country back in 2003.

“We had a white flag, everything was correct,” she explained, stressing that they were shot despite the clear sign of the white flags of humanitarians on the ambulances they were travelling in.

Even before she could take a breather and digest the incident, she was pulled back to reality by news of an anaemic woman who was going into labour.

DrJemilah performed an emergency C-section and delivered a healthy baby boy, all within hours after being shot in the hip and losing part of her team.

However, the reality of the situation only sank in six hours later, when DrJemilah asked the woman who had just given birth why was she packing her things to return home.

“If the bombs drop on my home tonight, I want to be with my children,” was the woman’s response to her question.

That’s when it hit DrJemilah – it is people like this woman and the many humanitarians who have lost their lives trying to save other people are the true heroes. She pointed out that calling her a hero, is a disrespect to all those who have died in such situations.

“Why am I complaining about this bullet in my hip? We can’t fight our destiny. There must be a reason why I am here? If I gave up, I wouldn’t be doing justice to those who gave their lives.”

It served as realisation for her that humanitarians aren’t protected from the brutalities of war.

Today, DrJemilah is the under secretary general for partnerships at the International Federation of Red Cross and Red Crescent Societies (IFRC), the world’s largest humanitarian group with over 190 national societies and 17 million volunteers.

Together, they strive to help and save those stuck in wars, natural disasters, and health emergencies with zero discrimination to nationality, race, religious beliefs, class, or political opinions. This also puts them in grave danger and IRFC is doing their best to keep their team and volunteers save.

“The humanitarian sector is no longer sacrosanct and international humanitarian law is no longer upheld. We are under attack when we shouldn’t be,” DrJemilah explained. It was reported that 29 Red Cross and Red Crescent volunteers have been killed in the line of duty since January 2017.

DrJemilah’s career in the medical sector began as a obstetrician and gynecologist.

But, it was a conversation with her son that sparked her love and interest in being a humanitarian.

Speaking to Sydney Morning Herald, DrJemilah recalled the night her life changed. She was watching television with her five-year-old son, explaining to him about the war in Kosovo and telling him that children there were starving due to the war.

His immediate response was, “Mum, you are a doctor, go and do something.” That was the beginning of DrJemilah’s journey as a humanitarian. She quickly applied to various humanitarian organisations volunteering her services and only Doctors without Borders responded.

In an interview with Perdana Leadership Foundation in the past, DrJemilah said she remembered asking her husband why Malaysians don’t give importance to humanitarian causes.

That’s when her husband told her that if she felt so strongly about it, she should start an organisation. In 1999, DrJemilah started MERCY Malaysia with the main objective of providing medical relief for vulnerable communities in both crisis and non-crisis situations.

MERCY Malaysia sent five missions to Kosovo during the war in 1999 to provide mobile medical care. DrJemilah also mentioned that MERCY Malaysia had so little funds when they first started, to the point that their volunteers had to pay for their own airfares to fly into the Kosovo war zone.

In the same year, the organisation also sent relief teams to Turkey to help victims of the 1999 Izmit earthquake. MERCY’s medical team was also the first to arrive in Aceh, Indonesia, during the December 2004 tsunami.

To date, MERCY Malaysia has sent its team and aid to many war-torn and disaster areas in the world including, Somalia, Turkey, Gaza, Sierra Leone, and Musan County in North Korea to name a few.

Calling her childhood home a “mini United Nations”, the 58-year-old doctor revealed that she was raised by kind and generous parents who taught her a great deal about helping those in need

“We used to live in a house that had families living with us. My parents had no hesitation helping people, feeding them and finding them jobs, so we used to have lots of people sleeping in our house. Rice was bought by the sacks. My parents were not rich but whatever they had, they shared.

“But both my parents didn’t talk about their philanthropy. When my mother died, people contacted us from all over Malaysia asking why the cheques stopped coming. She had been quietly sending donations to mosques and such. We did not know,” DrJemilah said in an interview with Perdana.

Her mother used to even send her off to Singapore with some money to visit her less fortunate cousins and buy them school supplies and shoes.

“My mother would say get your own school shoes at the same time. She really trained us to make people feel comfortable, it was not about making them feel helpless. At the end of the day, dignity is probably the most important thing – and maintaining the dignity of people affected by a crisis is crucial,” said DrJemilah.

DrJemilah’s unwavering commitment and selfless desire to bring relief to those who have, or are going through human or natural disasters is truly outstanding

She has been presented with numerous awards from both Malaysia and other countries including, four local royal awards – DPMP Perak, DMP Pahang, PJN from the Yang di-PertuanAgong and PSM that carries the title Tan Sri.

Internationally, she became the first recipient of the Isa Award for Service to Humanity in 2013. The Isa award was established by HM King Hamad bin Isa al Khalifa, the King of Bahrain, for celebrating outstanding world humanitarian leaders.

DrJemilah has also served as the catalyst and major driving force in MERCY Malaysia being recognised as the first Asian NGO and third NGO globally to be certified for humanitarian accountability by Humanitarian Accountability Partnership International in 2007.