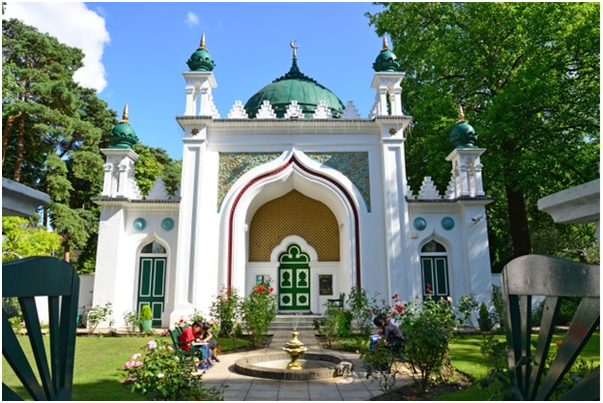 Despite being flanked by both road and rail, it’s easy to miss the Shah Jahan Mosque if you’re not looking out for it. The eagle-eyed, either in their car or aboard a train, may catch a fleeting glimpse of its striking emerald-green dome, but such a glimpse is insufficient. A building of such beauty and majesty deserves lengthy admiration from the closest of quarters.

Its comparative invisibility notwithstanding, the Shah Jahan Mosque has been one of the key landmarks in Woking since its construction in 1889. Located on Oriental Road, its presence in the identity of the leafy Surrey commuter town has since become a permanent fixture. It’s part of the local fabric. Indeed, the mother of perhaps Woking’s most famous son, singer Paul Weller, used to be the mosque’s cleaner.

Not that Woking had been an obvious place in which to construct Britain’s first purpose-built mosque. At the time of its completion, the town had no Muslim population. Most Muslims living in the UK in the late Victorian era, and usually temporarily at that, were lascars foreign sailors employed by British shipping companies). Landlocked Woking would hardly have been a port of call.

Accordingly, it’s unsurprising to learn that the first mosque to open its doors in Britain, a handful of months before the Shah Jahan Mosque did so, was in a port city. A solicitor in Liverpool called William Quilliam, who changed his name to Abdullah Quilliam when he converted to Islam from Methodism, turned a terraced house into a place for Islamic worship.

Woking’s lack of Muslim residents did not deter the man behind the building of the Shah Jahan Mosque, though. Dr Gottlieb Wilhelm Leitner was a Hungarian-born Jew with a vision of establishing an educational institution in Europe at which Islam and the Islamic world could be studied. While London would have been the more sensible location, the price of property sent him out of the city to Woking. The buildings and grounds of the defunct Royal Dramatic College were not only up for sale, but they could be bought cheap.

Leitner’s plans for what became the Oriental Institute were double-pronged, explains Sophie Gilliat-Ray, professor in religious and theological studies at Cardiff University. “The aim was to orientate those Indians coming to Europe for study, and likewise help European scholars to learn Indian languages prior to their travels in the Indian subcontinent. The mosque was built within the College grounds and served Muslim students, as well as students from London. Other notable worshippers included the Muslim staff serving in Queen Victoria’s household in Windsor.

“Leitner was an entrepreneurial and energetic individual, remarkable for his linguistic and intellectual capacities, both in terms of breadth and depth. He spent an extensive period in what is now Pakistan and was appointed as Registrar of the University of the Punjab in Lahore in 1882. But there is no record of him ever converting to Islam.”

Up in Liverpool, a man who had taken the Islamic faith, Abdullah Quilliam, reflected on how the local community saw him. “When I first renounced Christianity and embraced Islam,” he wrote in 1890, “I found that I was looked upon as a species of monomaniac, and if I endeavoured to induce people to discuss the respective merits of the two religions, I was either laughed at or insulted.”

Despite the reaction to Quilliam, he was far from an anomaly. A notable number among the indigenous British population were fascinated by Islam and its teachings. After Leitner’s death in 1899, the Shah Jahan Mosque closed for a number of years, before being revived and reopened in 1913. By then, certain figures from the British establishment had also converted, such as Lord Headley and MarmadukePickthall. Both made significant contributions to the evolution of Islam on these shores. Headley, under his adopted name of ShaikhRahmatullah al-Farooq, established the British Muslim Society, while novelist (and vicar’s son) Pickthall translated the Qur’an into English and was the editor of the Islamic Review, published from the mosque in Woking.

“These high-profile converts seemed to be attracted to Islam on account of its doctrinal teachings and its ethical, egalitarian principles,” explains Gilliat-Ray. “The development of scientific knowledge in the 19th and early 20th centuries offered less of a challenge to Islamic beliefs than to Christian ones. Indeed, for Abdullah Quilliam, the teachings of the Qur’an positively supported scientific discoveries. Some of these high-profile converts turned to Islam as a reaction to the power, privilege, disunity and political conservatism of some of the Christian churches.”

Yet these conversions did not signify the first interaction between Britain and Islam. “Muslims initially arrived in significant numbers as transient seafarers as part of the colonial shipping industry of the 19th and 20th century. Few were permanent settlers, but resided in boarding houses in the maritime ports of Liverpool, London, Tyneside and Cardiff,” asserts Gilliat-Ray. “These boarding houses often became a locus for later Muslim community development. Their location in and around dockland areas, and the fact that seafarers were coming and going with the arrival and departure of ships, meant that there was relatively little engagement with the wider population.”

If Muslim manpower was required to secure Britain’s colonial trading dominance, it also proved vital in less peaceful times. Gilliat-Ray says: “During the 20th century, Muslims from various parts of the British empire were crucial in both the First and Second World War efforts. Muslims worked in armaments factories, as well as on the battlefield. During the Second World War, the Indian army, which included large numbers of Muslim soldiers, constituted the largest voluntary army. Their bravery was recognised via the conferring of military awards, but for the vast majority, especially those lost at sea, there was little recognition of their contribution.”

The largest wave of Muslim immigration to Britain occurred following the Second World War, when the country was in need of rebuilding, both physically and economically. By then, Muslim migration had moved inland, away from the ports and into the industrialised cities.

“There was a need for semi-skilled and unskilled labour to work in British factories, textile mills and in public services,” explains Gilliat-Ray. “Many young single men came to Britain from the Indian subcontinent as economic migrants in the 1960s and 1970s. They intended to eventually return ‘back home’, taking their savings with them. However, legislative changes, among other things, led to the arrival of women and children to join their husbands and fathers in the UK, which led to a shift from temporary male residence to more permanent family settlement.”

The demographic make-up of Woking certainly followed this pattern, thanks to the easy availability of work in manufacturing industries during the postwar years, almost certainly coupled with the magnetic draw of the Shah Jahan Mosque. From that nonexistent presence at the time of the mosque’s construction, the town currently boasts a Muslim population of around 10,000, the highest of any town in Surrey.