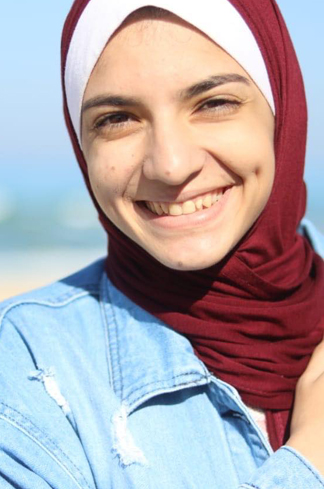 My chosen Ayah: The Ayah that affects my life the most is: “You do not know, perhaps after that Allah will bring a new event” (Al-Talaq 65:1). This Ayah is the first thing that comes to my mind whenever I feel down. When I feel like all the doors are closed, when there’s no hope in changing what has been done, no way to undo mistakes. This Ayah comforts me in my worst times, it tells me that everything happens for a reason, and you never know what’s good for you and what’s not, only Allah has this knowledge and He’ll only give us what we can bear.

In my point of view, living as a Muslim is kind of challenging these days. People, including Muslims themselves, misinterpret the instructions of Islam and they miss the actual point of it and the core of Islam. When I want to practice my hobby which is photography, I’m usually met with the strangest looks form passersby. They find it weird that a girl like me is out there doing what she wants, they think that Islam deprives the woman her freedom, and they confuse between what is Halal and what used to be socially unaccepted, with a great focus on the word (used to be). Basically, this is one of my main struggles, so in case I wanted to make some photo sessions, I tend to go too far places or in the very early mornings; which can be highly dangerous for girls in this society, so it’s a great risk to take. Therefore, I wish people really dig into what is right and wrong in Islam and stop using the horrible traditions that were once normal, but now they’re extremely unfair and sexist.

Regarding the Western view on Islam & Muslims, I believe it is generated from movies, T.V. shows, and series; It’s always a Muslim with a beard and an Arabic name who’s behind all the terror and crimes in the Western countries so people are brainwashed to link terror attacks and crimes with Muslims.

Personally, on the local level, when I’m applying for scholarships, it’s almost impossible to get accepted; some people don’t get accepted because they’re from Gazaothers get accepted but could not make it through and travel abroad, and it’s all due to the siege that I wholeheartedly wish to vanish as soon as possible so people can move on and live like the rest of the world.