Do we need another season of Hajj ? 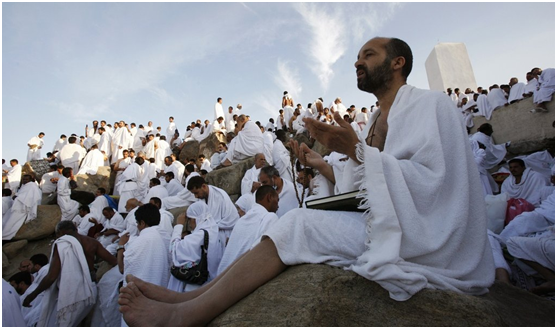 YES, we definitely need a Hajj season this year!

By WE, I am referring to humanity; I am not talking about those who are going to Hajj, or even Muslims! The whole body of mankind is in need of this blessed gathering… You don’t believe me? Well let us take a look at the following scenes:

The first scene takes place before our creation. It is a discussion between the Creator and the Angels, all about us:

{And remember when your Lord said to the Angels: “I am going to place a vicegerent on earth”.

They said: “Will you place upon it those who cause corruption in it and shed blood, while we glorify You with praises and sanctify You?”

Do you think the Angels were right? That mankind will cause corruption and bloodshed on earth? Of course yes! Massacres are taking place everywhere in our world in different forms and shapes. In Syria, we got used – and even desensitized – to YouTube videos showing dead bodies of people who were tortured to death.

Wars between tribes in various African countries are not uncommon.

In the western hemisphere, killing can take a more “civilized” fashion. The killer needs only to push a button to launch a missile from an unmanned airplane and kill a whole family in Afghanistan or Pakistan!

While scene 2 is a direct manifestation of the Angel’s expectations from human beings, scene 3 represents slow killing of poor communities through starvation and lack of water, medicine, and essentials of life.

This greed reminds me of the hadith of our beloved Prophet (peace and blessings be upon him):

In the 21st century, and despite all the technological and social development that we have accomplished, we still suffer from this disease. People are still being judged based on their skin color, their car or house, their foreign passport or their country of residence.

In the age of the I-phone, the MY-space, and the YOU-tube, the selfishness and the high ego of individuals is growing indefinitely. Imagine the six billion humans on the face of earth, each of them yelling and screaming: Me, Me, Me!! What kind of chaotic world we are living in? What would be the nature of the world that our kids will live in?!

Did the first five scenes trouble you?

Well, they should! `Umar ibnKhattab used to say:

‘He who did not taste the bitterness of the period of Al-Jaheleyyah (the period of ignorance) does not appreciate the sweetness of Islam.’

So we really won’t appreciate the impact of Hajj on humanity before we examine the ugly status that humanity has reached!

In Hajj, people from all across the world, from the richest countries and from the poorest neighborhoods, come together to attend this blessed convention.

The Qur’an describes in an amazing way how people will answer the call of Prophet Ibrahim (peace be upon him) all within their financial and social capabilities:

These people will leave behind their business suits, their foreign passport, their six-digit (or zero digit) bank account numbers, their three-lettered titles (CEO’s, MBA’s, and/or Ph.D.’s) and stand next to the humblest person on the face of earth.

They pray together, wear the same outfit, run between Safa and Marwah together, and stand in line to drink from the blessed Zamzam water. They all remember the sacrifice of Prophet Ibrahim when he slaughtered a sheep, and emulate his example by slaughtering a sheep and donating it. This actually is one of the few Sunan (rituals) of Hajj that people who are not part of the Hajj season can participate in.

This gathering of 3 million humans goes with minimal fights, clashes, and arguments, despite the huge diversity of the people involved. This is all due to the following rule that was set by the One who invited them:

{Hajj is to be made during well-known months, so whosoever intends to perform Hajj therein, then he should not have sexual relations with his wife, nor commit sin, nor dispute unjustly during the Hajj…} (Al-Baqarah 2:197)

Unfortunately, I do not claim at all that the beauty of scene 6 can deplete or overcome the bitterness of the previous scenes. But what I am positive about is that these three million attendees can serve as a role model for peace. They can be a demonstration for brotherhood. They prove that human beings can humble themselves and put their differences aside.

At this critical stage in the life of our Umma, we ask Allah to make us – through the Hajj season – a role model for peace, brotherhood, and love between humans. This is – in fact – one item on our to-do list as Muslims:

{And thus we have made you a justly balanced nation, so that you be witnesses over mankind and the Messenger be a witness over you…} (Al-Baqarah 2: 143)

As a practical take-home message after reading this article, please share these ideas with your non-Muslim colleague, friend, or classmate.

Let’s take the initiative and show the positive side of Muslims that is represented in Hajj, despite all other pictures that are portrayed for us in the media.