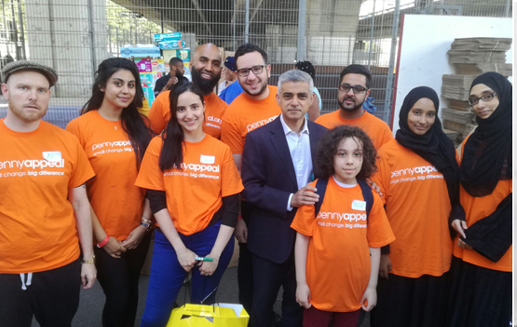 Penny Appeal volunteers have been on the ground since 3am to provide aid to those affected by the Grenfell Tower blaze in West London.

A crisis team from Penny Appeal was dispatched as soon as news of the tragedy hit in the 24-storey tower block began to filter through press outlets. The Metropolitan Police say that a number of people have lost their lives, with many more still missing. It will reportedly take weeks for fire investigation teams to piece together a full picture of the tragic events.

#TeamOrange volunteers, working with the Faiths Forum for London and the British Red Cross have been delivering aid packages to those in need. Blankets, water, food parcels, clothing and hygiene essentials have been packaged and supplied to the front-line of the crisis hit area of west London.

Our London based team was offering support on the ground at 3am, just shortly after news of the incident hit. Later in the day, an eight-strong team of volunteers responded to the crisis, with numbers reaching around 30 the following day. The volunteers’ duties have included sorting through the stock of donations and aid supplies and gathered in London, manning the reception area and distributing meals at food stations. Up to 300 people have so far received hot meals thanks the efforts of #TeamOrange volunteers.

Penny Appeal are asking people to donate anything they can to help the people affected by the fire. Harris Iqbal, Head of Programmes said, “All donations are going to be used by those in need” and thanked people who had offered to volunteer, with the numbers of people trying to help “in the hundreds”.

Along with aid, volunteers are offering befriending and emotional support to victims. On the front-line, the aid effort has been split into two sections, with a ‘food corner’ and ‘clothing corner’. Donations are currently being taken online and by phone on 0300 11 1111.