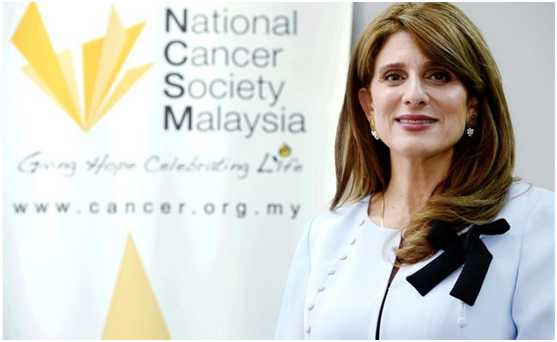 Despite jetlag and a back-to-back schedule, Princess Dina Mired still looked sharp, without a strand of hair out of place.

More importantly, she knows her facts and does not hesitate to speak her mind.

The Princess of Jordan was in Kuala Lumpur for a four-day visit, on the invitation of the National Cancer Society of Malaysia (NCSM) to promote the upcoming World Cancer Congress (WCC) to be held in Kuala Lumpur in October.

The down-to-earth princess was warm and in good spirits as she met young cancer patients at the NCSM premises in Kuala Lumpur before having one-to-one interviews with members of the media.

Princess Dina, 52, is president-elect of the Union for International Cancer Control (UICC) – the world’s largest international cancer-fighting organisation with over 1,000 members in 164 countries – and a global advocate for cancer control and non-communicable diseases (NCD).

She was also the Honorary Chairperson of the Jordan Breast Cancer Programme from 2006-2016, advocating early detection and screening of breast cancer for women in Jordan.

In 2011, she was chosen to deliver the keynote speech on behalf of civil society at the first ever United Nations High-level Meeting on NCDs, raising cancer’s profile on the global health agenda.

The Jordanian princess also led the King Hussein Cancer Foundation (KHCF) in Jordan as director-general for 15 years, elevating the organisation’s standing into a leader in the global movement for people affected by cancer.

For the princess and her family, cancer was something that they came face-to-face with 20 years ago.

In 1997, their second child Prince Rakan was diagnosed with leukaemia when he was barely two years old. He had a relapse during his treatment and underwent bone marrow transplant, with the donor being his sister Princess Shirin.

Asked how that experience has changed her and the family, the princess replied, “I think nobody who goes through such a traumatic journey comes out the same. When you go through something like that, you really understand that the most important and precious thing in life is health. Because when you lose it, you lose control, and you cannot do anything,” she said, as her voice and eyes softened.

Going through such a journey also puts things into context, she added.

“I think what happens is when you come out the other end, you start to enjoy the simple things in life, and you stop sweating the small stuff. You put things into perspective and, I think, you almost say that it’s a blessing to had the cancer because you got the wake-up call,” she said.

Princess Dina readily admitted that they were lucky to be able to afford to go for treatment abroad in the United States and Britain, and that her husband and immediate family were very supportive.

“And even with all of that, it was still very hard, so just imagine the poor people who have to go through cancer. I always say the equation for poverty and cancer is catastrophe.

“So I think people should realise and remember this fact because people who lack financial and emotional support need a lot more support,” she emphasised.

In line with her cancer advocacy, Princess Dina is also Honorary Chair of the Tobacco Free Portfolios steering committee and Honorary President of the Harvard University Global Task Force for Expanded Access to Cancer Control and Care in the Developing World.

Having been briefed about the local fight against tobacco in Malaysia during her visit, she shared some advice.

“Malaysia, I understand, has had some successes. You raised the price of cigarettes a little, banned smoking in some places, but unfortunately, even though those are positive steps, they are limited.

“I would love for Malaysia to be able to make a dent in the fight against tobacco, and to stop the new generation from smoking. The amount of price hike needs to be able to deter new and young customers from buying cigarettes,” she said.

She pointed out that Malaysia is a signatory to the World Health Organisation’s Framework Convention on Tobacco Control, which has clear guidelines pertaining to things like smoke-free areas, advertising, packaging and labelling.

“I think the people, decision-makers and policy makers should understand that because the wings of the tobacco industry have been clipped in Europe, America and so on, it needs new markets and therefore, is zooming in on the Middle East, Asia and Africa. Why? Because we don’t have strict regulations,” said Princess Dina, who holds a Bachelor’s degree in Accounting and Financial Analysis from Warwick University and a Master’s degree in International Banking and Financial Services from Reading University, both in Britain.

“People need to know that CEOs of big tobacco industries don’t smoke because they know there are thousands of chemicals in it. They know how harmful it is but what they do is they focus on our youth, get them addicted, take our money and then go and sunbathe somewhere!” said Princess Dina unreservedly.

Overall, she commented that Malaysia has some good treatment plans and early detection programmes, but felt that Malaysia’s national cancer control plan needs to be implemented and not just be “sitting on the shelf”.

“What’s the point of having it then? But if it is costed, has a budget and there is an action plan with deadlines and KPIs (key performing index), then it’s going to trickle down to all the policy makers,” she urged.

She also highlighted the need for the country to update the national cancer registry, which was last updated in 2011.

“We are in 2018. How can policy makers make better decisions or know the successes or weaknesses if you don’t have the numbers? Other countries have moved on not only with cancer data, but with non-communicable diseases’ data. And this doesn’t cost money, just political will and organisation,” she emphasised.

One of the key roles of UICC is to narrow the gap of cancer control between developing and developed countries.

“What we work on is to unite the global cancer response because many organisations in the cancer community, in earlier years, were working in silos, meaning the cancer agenda was not top priority in the global health community,” said Princess Dina, who will commence her term as UICC President, the first from the Arab region, in October this year.

UICC also holds governments accountable when it comes to implementing the Global NCD Action Plan 2013-2020, which wants to reduce premature mortality from NCDs by 25% by the year 2025. The action plan came about after the UN Political Declaration on the Prevention and Control of NCDs was adopted in 2011.

Equitable access to care is another goal of the UICC.

“The gap has been narrowed but if countries continue at the rate they are at now, we will not be able to reach our goals by 2020.

“And what that means is, we are not saving the lives that we should be saving. People are dying needlessly due to lack of political will and lack of focused policies to fight cancer head-on to make it part and parcel of the health agenda,” she pointed out.

The WCC will be held for the first time in Malaysia, and South-east Asia, in October, bringing together over 3,500 cancer control and public health experts from 150 countries, with 500 renowned speakers.

The programme includes about 90 multi-disciplinary sessions and will cover topics ranging from obesity, tobacco control, HPV vaccination and screening programmes as well as complimentary medicines and economics of cancer care.

The World Cancer Leaders’ Summit – a major annual high-level policy meeting dedicated exclusively to furthering global cancer control – will be held on the first day of the Congress.

The WCC is organised by the UICC every two years in a UICC member country. This year’s congress is hosted by NCSM.

“It is a great opportunity for Malaysia to capitalise not only on the Cancer Leaders’ Summit but also on the Congress. It is an amazing knowledge-sharing event, with a wealth of opportunity to meet top experts in one place and to unite the national effort.

“It is also the time to advocate and pressure decision-makers that cancer and NCD should be the top priority for the Malaysian government, especially with the new government. This is the time to do it right,” she said in conclusion.