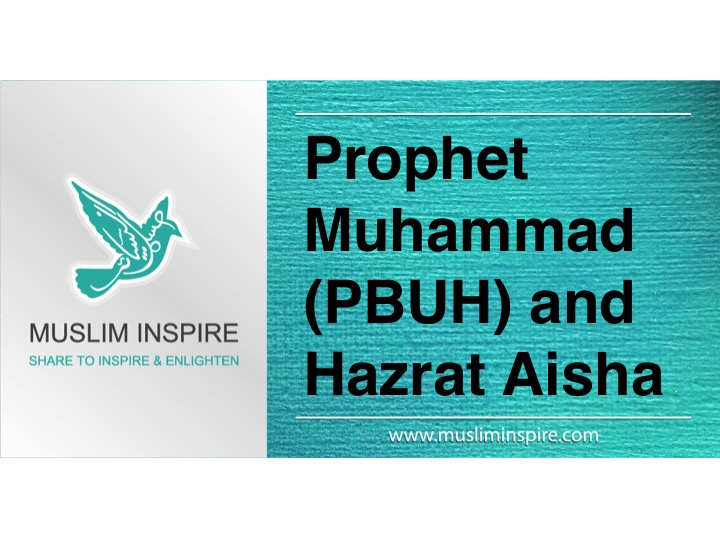 The misinformation has led to the false narrative that child marriage has the sanction of Islam, when it clearly does not. The Quran sets a minimum age of marriage which is at least puberty. Since the approval of the girl has a legal standing, she cannot be a minor.

Furthermore, besides marriage being specified when one enters puberty, Quran 4:6 also orders that the person entering marriage has to be of sound mind, and that they should be capable of managing one’s own affairs. So the verse (4:6) not only specifies puberty as the age of marriage but also that the person has to be intellectually mature (Rushd).

A perusal of the Quran will reveal that marriage in Islam is a civil contract, meesaaq (4:21), and as such it can be finalised only between persons who are intellectually and physically mature enough to understand and fulfill the responsibilities of such a contract. This can be further understood from the verse; “And test the orphans until they reach the age of nikah (marriage), and if you find in them rushdh (maturity of intellect) release their property to them.”(4:6). It may be noted here that the Quran makes intellectual maturity (which always falls beyond the age of puberty) the basis to arrive at the age of marriage. This is also in conformity with the Quranic description of marriage as emotional bonding between two mutually compatible persons through which they seek “to dwell in tranquility” (see 7:189 and 30:21) in the companionship of each other which is not possible if either of the spouses is mentally undeveloped.

Unfortunately, some Muslim jurists don’t seem to have understood these Quranic teachings.

It should also be noted that the Prophet Mohammad (PBUH) married off his daughters Fatima at 21 and Ruquiyya at 23.

Critics site one hadith stating that the Prophet Muhammad (PBUH) married a 9 year old, however this is contradicted by other hadiths and stories, which suggest the women, Aisha was more likely around 19. So if we are to validate her age we need to look at other sources other than these two hadiths.

Critics allege that Aisha was just six years old when she was betrothed to Prophet Muhammad (PBUH), himself in his 50s, and only nine when the marriage was consummated. They base this on a saying attributed to Aisha herself (Sahih Bukhari volume 5, book 58, number 234), and the debate on this issue is further complicated by the fact that some Muslims believe this to be a historically accurate account, reading the hadith in isolation to other hadiths and stories from that time.

Most of these narratives are reported only by Hisham ibn `urwah reporting on the authority of his father. An event as well known as the one being reported, should logically have been reported by more people than just one, two or three.

Tabari in his treatise on Islamic history, while mentioning Abu Bakr reports that Abu Bakr had four children and all four were born during the Jahiliyyah — the pre Islamic period. Obviously, if Aisha was born in the period of jahiliyyah, she could not have been less than 14 years in 1 AH — the time she most likely got married.

The well-known historian and scholar ‘Allama ‘Imad-ud-Deen Ibn Katheer writes in his ‘Al-Badayah’ about Sayedah Asma’ daughter of Hazrat Abu Bakr’ (Allah be pleased with him) (and we hope Maulana Syed Abul Ala Maududi must have seen it as he referred to ‘Al-Badaya’ in his article): Asma’ died in 73 A.H. at the age of 100 years. She was ten years older than her sister ‘Aisha. Now according to this report ‘Asma’ would have been 27-28 years old at the time of Hijrah and since she was ten years older than Sayedah ‘Aishah, therefore the age of Sayedah ‘Aishah would have been 17 or 18 years at the time of Hijrah. Accordingly, her birth falls about four or five years before the Call, and her age at the time of the consummation of marriage in 2 A.H. will work out to 19-20 years.

Aisha had already been engaged to someone else before she married Prophet Muhammad (PBUH), suggesting she had already been mature enough by the standards of her society to consider marriage for a while. It seems difficult to reconcile this with her being six.

Ibn Hisham’s version of Ibn Ishaq’s Sirat Rashul Allah, the earliest surviving biography of Prophet Muhammad (PBUH), records Aisha as having converted to Islam before Umar ibn al-Khattab, during the first few years of Islam around 610 CE. In order to accept Islam she must have been walking and talking, hence at least three years of age, which would make her at least fifteen in 622 CE.

According to the generally accepted tradition, Aisha was born about eight years before Hijrah (Migration to Medina). However, according to another narrative in Bukhari (Kitaab al-Tafseer) Aisha is reported to have said that at the time Surah Al-Qamar, the 54th chapter of the Qur’an , was revealed, “I was a young girl”. The 54th Surah of the Qur’an was revealed nine years before Hijrah. According to this tradition, Aisha had not only been born before the revelation of the referred Surah, but was actually a young girl, not even only an infant at that time. So if this age is assumed to be 7 to 14 years, then her age at the time of marriage would be 14 to 21.

In addition, some modern Muslim scholars have more recently cast doubt on the veracity of the saying, or hadith, used to assert Aisha’s young age. In Islam, the hadith literature (sayings of the prophet) is considered secondary to the Quran’s . While the Quran is considered to be the verbatim word of God, the hadiths were transmitted over time through a rigorous but not infallible methodology. Taking all known accounts and records of Aisha’s age at marriage, estimates of her age range from nine to 19.

Because of this, it is impossible to know with any certainty how old Aisha was. What we do know is what the Quran’s says about marriage: that it is valid only between consenting adults, and that a woman has the right to choose her own spouse. As the living embodiment of Islam, Prophet Muhammad’s (PBUH) actions reflect the Quran’s teachings on marriage, even if the actions of some Muslim regimes and individuals do not.

The Islamophobic depiction of Prophet Muhammad’s (PBUH) marriage to Aisha as motivated by misplaced desire fits within a broader Orientalist depiction of Prophet Muhammad (PBUH) as a philanderer. This idea dates back to the crusades. According to the academic Kecia Ali: “Accusations of lust and sensuality were a regular feature of medieval attacks on the prophet’s character and, by extension, on the authenticity of Islam.”

Of the women Prophet Muhammad (PBUH) married, the majority were widows. To consider the marriages of the prophet outside of these calculations is profoundly a historical. As was the tradition in Arabia (and still is in some parts of the world today), marriage typically served a social and political function – a way of uniting tribes, resolving feuds, caring for widows and orphans.

Chronological Imprecision in the Prophetic Biography

Aisha was almost certainly no exception to the rule that the medieval Arabs did not keep track of their birth dates or the accurate passage of years. In fact, the chronology of many famous events in the life of the Prophet himself, peace be upon him, are the subject of difference of opinion.

Even for something as important as the length of the Makkan period, we find that Ibn `Abbas states that “the Apostle of Allah… remained in Makkah for thirteen years…then migrated to Medina…”[22] However, RabiaibnAbiAbd al-Rahmán says, “He stayed ten years in Makkah receiving revelation, and stayed in Medina for ten years…”[23] Both hadiths are recorded in Saheeh al-Bukhari.

This demonstrates that even a hadith in Saheeh al-Bukhari need not be taken as precise with respect to chronological matters, despite its authentic transmission. In fact, few major events in prophetic biography have complete consensus as to their chronological occurrence.

What the records are clear on is that Prophet Muhammad (PBUH) and Aisha had a loving and egalitarian relationship, which set the standard for reciprocity, tenderness and respect enjoined by the Qur’an. Insights into their relationship, such as the fact they liked to drink out of the same cup or race one another, are indicative of a deep connection, which belies any misrepresentation of their relationship.

The truth is that the Quran being the locus classicus of Islam, no authority can supersede it. Even the Prophet was commanded to judge by it (4:105, 5:49, 6:50, and 7:203). Furthermore, as the Quran claims to be a guide for all periods, it supports the notion that any law formulated on the basis of its framework has to evolve from time to time.

In conclusion, although the ‘six-nine’ hadith may be authentic, it is based ultimately on the authority of Aisha. In view of prevailing norms of her time, it is very unlikely that she knew her own age, and other reports and historical evidence indicate that she was, in fact, between fifteen and twenty (15 – 20) years of age, and most historical extracts show eighteen to twenty (18 – 20) years of age. As these other reports relate Aisha’s age to actual historical events that took place, they are likely to be a far more reliable indicator.

Hazrat Aisha (may Allah be pleased with her) occupies a huge place in the Islamic tradition. Being the second most prolific narrator of the prophetic sunnah means that approximately a quarter of what we know about the prophet (peace be upon him) has come directly through her.

Aisha was incredibly intelligent and astute women, a stateswoman, scholar, mufti, and judge, Aisha combined spirituality, activism and knowledge and remains a role model for many Muslim women today. The gulf between her true legacy and the maligning of Islam and the Prophet Muhammad(PBUH) is not merely historically inaccurate, it is an insult to the memory of a pioneering woman.