the most remarkable referee in England 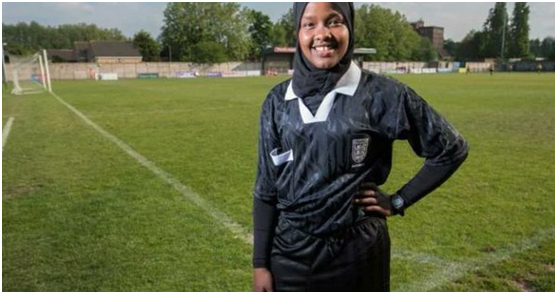 This hijabi referee is dubbed “the most remarkable referee in England”

Jawahir Jewels – known on the pitch as JJ – is Black, hijabi and a Football Association qualified referee in England.

She definitely stands out in the pitch, not just for her headwear and skin colour, but also for her height – the 23 year old is quite short compared to the towering football players she referees.

Jawahir referees weekend amateurs, charity matches, women’s games at City University, and is crazy about football herself. She began her career calling junior matches, and made her way up from there.

Often, players react to the news that she’ll be refereeing their match with confusion. “Sometimes I have to tell them about five times: ‘Yeah, man, I am your referee.,’ “ she tells The Telegraph. “And they usually go: ‘No way, when’s the proper ref coming?’ ”

She has even refereed former Premier League players such as us Jamie Lawrence and Leon Cort. “First half I didn’t really notice her, which is kind of what you want of a ref,” Cort says. “Second half got a bit tougher, more competitive, harder for her. But she’s learning. She done well.”

While she often gets yelled at for some of her calls – like any referee – racial slurs are, thankfully, much rarer. She did receive a racist remark once, and she reported it to the local FA.

The idea of possible racist remarks doesn’t put her off though. “It’s helped loads in my university life,” she says. “If you’re just chilling the whole time, man that’s boring. It’s good to stretch yourself, to test yourself. Decision-making, being strong: you learn so many values from being a ref. And what I love is, get it right, they trust you.”

“Sometimes I do kick-ups at half-time just to show them I’m not here by accident… That usually opens their eyes. Mainly because I’m probably better than most of them at it.”

Story from The Muslim Vibe