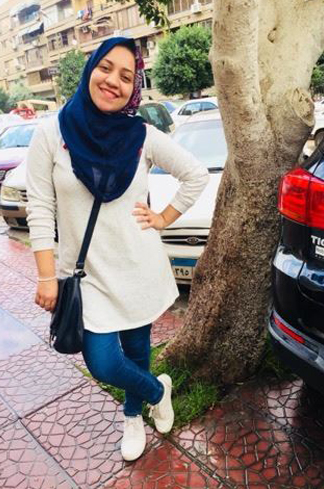 Hobbies and interests: I like reading stories on mental illnesses and psychopathy, I usually tend to follow the development of some patients and their treatment sessions. I’m also interested in watching psychology related T.V. shows and series. I like reading and writing motivational stories. I’m interested in photography as well.

My chosen Ayah: The closest Ayah to my heart is: “When My worshipers ask you about Me, I am near. I answer the supplications of the suppliant when he calls to Me; therefore, let them respond to Me and let them believe in Me, in order that they will be righteous” ( Al –Baqarah- 1:186). This Ayah is my favorite for it always reminds me of how much significant my Duaa and prayers are, and how much prayers can change one’s life. It reminds me how good Allah has been with us and how much he blesses us every day and that we have to thank Him by making Duaa.

“Unlike the secular approach, the Islamic viewpoint does not differentiate between scientific knowledge and religion, but rather believes they work hand in hand”. Since I majored in Psychology, I had realized how important emotions and feelings are, and the enormous effect they have on people’s success in life. One of the main reasons that urged me to choose this field was to help the traumatized people of Gaza, especially the children, who have been through three devastating wars, different strikes, unstable political situations, and the suffocating siege. Being a survivor in these kinds of situations was a blessing and a curse, but Allah asked us to be patient and so we tried. The last war was right after I finished high school, so when it was the time to choose my major, it wasn’t hard to decide what I wanted to do. I wanted to be the person that people go to in order to feel lighter after letting it all out, I wanted to be the well of secrets where they feel no shame, no embarrassment, no judgmental looks. So alhamdulillah I fulfilled my ambitions and became the person I wanted to be, I helped so many people who now meet me with a smile on their faces and a Duaa from their hearts.

Regrettably, the relationship between the Western countries and Israel is quite strong and that added some points to the advantage of Israel and gave it a great help in ruining the image of Islam and Muslims, especially the Muslims of Palestine. Israel is now promoting the image of Palestinian as terrorists using their propaganda and media to convey false and one-sided stories to the naïve people who believe everything they see on T.V. Therefore, one of my wishes is for the world to see the real Muslim Palestinians with their true colors.