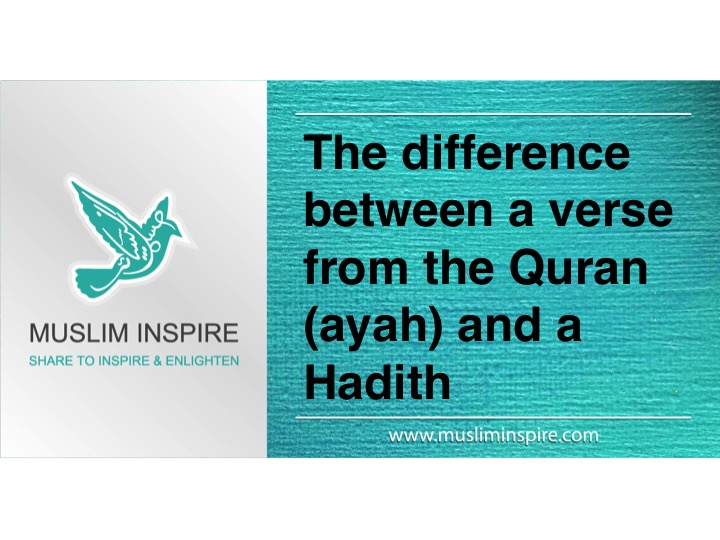 A verse (ayah) means a sentence who’s beginning and end are obvious in the Quran. Each verse of the Quran is a miracle. Each verse is evidence for the honesty of the prophet that conveys it and an exemplary lesson for those who think, contemplate and meditate; each verse is ‘something strange’ because it is a miracle and has a value.

Hadiths are the words, deeds, approvals and the Sunnah of the Prophet that consist of his moral and humanly qualities expressed in words or in writing. In this sense, hadith is synonymous with the Sunnah.

The word hadith was started to be used as a general name for the news reported from the Prophet in the course of time.

The Messenger of Allah (pbuh) did not only convey the revelation that he received from Allah to people but he also explained them and practised them in his own life, being a concrete example for them. Therefore, he was also called the living Quran.

Islamic scholars generally regard the hadiths related to religious issues as to have been revealed to the prophet by Allah and show the following verse as evidence for it:

In addition, they say the word hikmah (wisdom) mentioned in the following verse means sunnah:

“Allah did confer a great favour on the Believers when He sent among them a Messenger from among themselves, rehearsing unto them the Signs of Allah, sanctifying them, and instructing them in Scripture and Wisdom, while, before that, they had been in manifest error.” (Aal-i Imran, 3/164)

As it is understood from the verses and news above, the Quran and the hadith (or the Sunnah in a broader sense) are the same in terms of being revelations sent to the Messenger of Allah (pbuh) by Allah. However, the Quran differs from the hadith because it is impossible to produce something like the Quran in terms of its meaning and words, it is determined in writing in the preserved tablet (Lawh al-Mafuz), and neither Jibril nor the Prophet (pbuh) can make any changes in it. Hadith was not revealed as words; so it is not miraculous like the words of the Quran; it is permissible to report it only with its meaning as long as the meaning is not changed.