THE MYTHS ABOUT ISLAMIC POLYGAMY 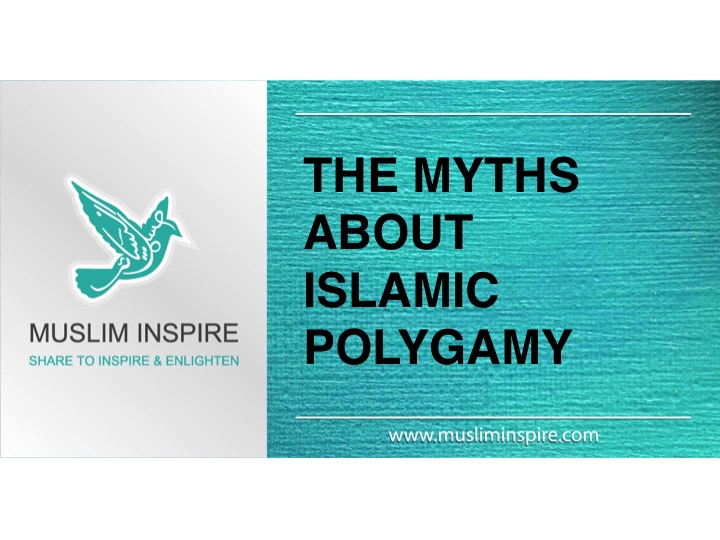 O People, it is true that you have certain rights over your women, but they also have rights over you. Remember that you have taken them as your wives only under God’s trust and with His permission. If they abide by your right then to them belongs the right to be fed and clothed in kindness. Treat your women well and be kind to them, for they are your partners and committed helpers. -Prophet’ Muhammad’s Farewell Sermon

One of the most contentious issues that comes up in any debate on Islam’s gender practices, is polygamy. Contrary to various myths, polygamy is a unique and revolutionary social safety and security net that has unfortunately been maligned on account of its abuse. The issue of polygamy requires a much-nuanced understanding.

The Qur’anic institution of polygamy is a piece of social legislation which was designed not to gratify the male sexual appetite and lust, but was intended to correct the injustices done to widows, orphans, and other female dependents, who are especially vulnerable. It ensured that unprotected women were decently married, and old loose, irresponsible liaisons of men were abolished and morality was restored and upheld.

But the primary concern of the Qur’an was orphans. To me Qur’an is the only book, which has so many tons of verses overflowing with profuse compassion for orphans. There can be no better manifesto of rights of orphans.

In the Qur’anic context, polygamy implies that there has to be a relationship between the woman or women whom the Muslim man marries and the orphans, because marrying a woman unrelated to orphans will not be of help in safeguarding their rights. While doing justice to orphans is mandatory, so also is doing justice to all the women whom a Muslim man marries. A Muslim family unit is built on the Islamic notion that the husband must always be the primary breadwinner and a wife must always be the primary care giver.

The Qur’an permits polygamy — not readily but reluctantly as the last resort — and only in conditions of great social hardship and for humanitarian purposes. It is very important to note that there are two commandments to do justice, and that polygamy was allowed for the benefit of orphans and the women who were their guardians or caretakers.
There are two countries, which have banned polygamy while several countries have imposed restrictions on them. Turkey was the first Muslim country to legally ban polygamy in 1926. This decision was not based on religious reasons, but rather was an entirely secular ban. Tunisia was the next country to ban polygamy through legislation passed in 1956 and restated in 1964.In other Muslim countries, it is restricted. In Pakistan, man cannot contract another marriage during the subsistence of an existing marriage without the permission of the Arbitration Council.

There is a clamour in the west and they have a right to ask – why is the taking of more than one wife even mentioned in the Qur’an if it was never meant to be exercised? Well, here we have historical context. The Prophet lived at a time when continual warfare produced large numbers of widows, who were left with little or no provision for themselves and their children. In these circumstances, polygamy was encouraged as an act of charity. Needless to say, the widows were not necessarily sexy young women, but usually mothers of up to six children, who came as part of the deal.

On this point Muslim law is more elastic and more in harmony with the requirements of society than the other systems of law, which do not permit polygamy in any case. Supposing there is a case in which a woman has young children, and falls chronically ill, becoming incapable of doing the household work.

The husband has no means of employing a maid-servant for the purpose, not to speak of the natural requirements of conjugal life. Supposing also that the sick woman gives her consent to her husband to take a second wife, and that a woman is found who agrees to marry the individual in question. Western law would rather permit immorality than a legal marriage to bring happiness to this afflicted home. In fact, Muslim law is nearer to reason. For, it admits polygamy when a woman herself consents to such a kind of life. The law does not impose polygamy, but only permits it in certain cases. Polygamy is not the rule, but an exception.

The worst tragedy for a woman is when her husband passes away and, as a widow, the responsibility of maintaining the children falls upon her. In the Eastern World, where a woman does not always go out to earn her living, the problems of widowhood are indescribable. Prophet Muhammad upheld the cause of widows. Most of his wives were widows. In an age when widows were rarely permitted to remarry, the Prophet encouraged his followers to marry them. He was always ready to help widows and exhorted his followers to do the same.

If understood correctly in its Qur’anic context, polygamy was a grave responsibility for Muslim men. In practice, however, it has often been regarded as a male privilege intended for the pleasure of men. The stringent conditions which are tagged by Qur’an to polygamy have generally been disregarded by the traditional interpreters.

It goes on to add that,

The verse was revealed after the battle of Uhud in which the Muslims not only lost against the pagans, but also several men died and there were large number of widow Similarly, we have lost more than 90,000 people in the Syrian civil war that has left so many women widows, and orphans.

Even in this historical context, the Quran asks men to first consider taking care of orphans, and only when they think they may not be able to do justice to the orphans’ interests while staying in isolation, should they consider marrying their widowed mothers, on the condition that the new family would be dealt justly and on par with the existing one.

If the rights of Muslim women are upheld and advanced as contained in the spirit of the Qur’an, then the justice that it embodies will never be ignored. Islam does not allow a husband to act cruelly to his wife, either physically or mentally.

“O you who believe! You are forbidden to inherit women against their will. Nor should you treat them with harshness… on the contrary live with them on a footing of kindness and equity. If you take a dislike to them it may be that you dislike a thing which God brings about through it a great deal of good” (Q 4:19)

Plurality of wives made sense at a time of war, when there were many widowed women and sometimes they fell on hard times. It was also a sociological mechanism to ensure that men with barren wives could marry again and reproduce. It was certainly not a licence for lust, as suggested by the orientalist fantasy of the harem.

The Qur’an explicitly states that a man intending to take more than one wife is only allowed to do so if he treats each wife equally. He must lavish his love and affection equally, and financially support each wife absolutely equally to the penny. It’s very important for relationships to be neutral and fair, the concept of fairness demands that a husband treat all his wives with complete, and unfailing, magnanimity; showering on each his equal and undivided attention. The husband needs to provide for the physical, emotional, and monetary, in effect, the complete ‘worldly’ welfare, of each of his wives, without making any allowance for a compromise or his favouring of one spouse over another. Anything short of this would be considered as a violation of the Holy Quran’s recommendation for observing justice. This is simply not possible which leads us to believe that polygamy was never meant to be practiced and is only done so by men exploiting Qur’anic teachings.

The Prophet Muhammad said, “Whosoever has two wives and he inclines towards one to the exclusion of the other, he will come on the Day of Judgment with his body dropping or bending down. “In other words, “It is mission impossible”. There is no place for polygamy in modern society. “There are a number of cases we have come across and there is hardly a case where a man can balance all the duties required in a polygamous situation.

In today’s industrial society, it is impossible to observe the conditions laid down by the scriptures. But social psychologists will say that polygamy is a solution to many complex and difficult situations and, in the absence of a socially sanctioned mechanism, extra social arrangements have to be worked out. Polygamy protects the status of women by according them full rights. Instead of being a secret “mistress” she becomes a dignified wife with all the rights and privileges that come with being a wife. Polygamy ensures sexual purity and chastity and whenever polygamy has been banned, it emerges from history that illicit sex has raised its head. An unlawful mistress is more harmful for social fabric than a lawful second wife.

A New York Times review of the book in 1994 described the views of Robert Wright the celebrated author of The Moral Animal in this way: “Monogamy, Mr. Wright says, does not favor the interests of most women, particularly lower-status women. Most human cultures throughout history have been mildly polygynous, with wealthier men attracting several wives. Though women in these cultures ‘are often less than eager to share a man,’ he writes, ‘typically, they would rather do that than live in poverty with the undivided attention of a ne’er-do-well.’ Monogamy instead favors lower-status men who in a polygynous society would be frozen out of the marriage market by wife-collecting elite. It is no coincidence that Christianity has advocated monogamy and pitched its message to poor and powerless men.”

The compelling message of the Qur’an is: Polygamy is a provision for the welfare of widows and orphans and certainly not for the convenience of men. If the overriding concern is the welfare of these destitute, polygamy has an enduring and great relevance. Scriptures were meant for human societies. But there will always be animal spirits in them. We have the tools for taming them –laws for punishing them, norms for shaming them. Let us not in our imperfect understanding or prejudice throws the baby with the bathwater.