Are all types of Music unlawful in Islam? 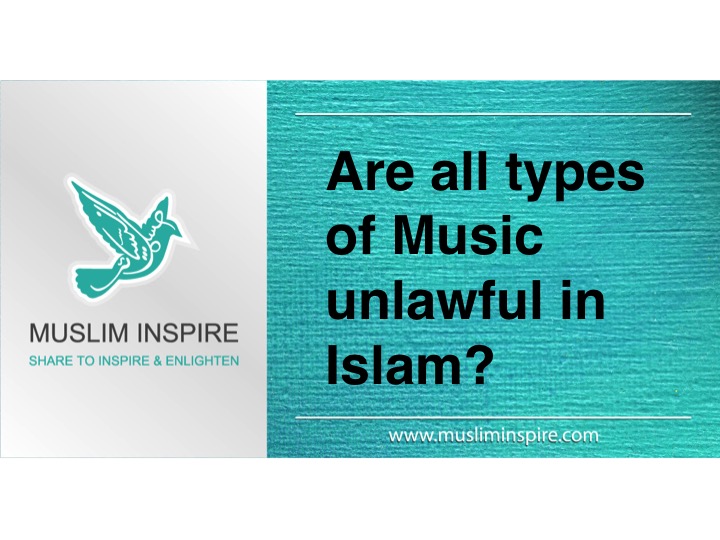 It is known that music is one of the most controversial issues among jurists. While some scholars see that music is completely forbidden, others are for the view that it is permissible as long as it is free from all kinds of paganism, sensuality, immorality, and subliminal messages

We must not condemn the entire west as morally corrupt, while falsely pretending that all of the Muslim society is morally upright. We must never fall into the sins of stereotyping, racism, and self-righteousness.

Furthermore, if the music itself should be condemned outright, why did the Prophet tell us to recite the Qur’an melodiously, and why did the Prophet himself allow music in weddings? Mind you he also listened to the girls singing in a wedding celebration he attended.

All in all, music is an issue that has been hotly debated by scholars of the past and the present. While many of them have been generally inclined to condemn all forms of music, with the singular exception of ad-duff (tambourine) in weddings, quite a few of them have taken a more positive approach of considering only music containing sensual, or unethical themes or subliminal messages as being categorically forbidden.

The latter view seems to be more consistent with the general nature of Islam, which is undoubtedly a complete way of life that caters to all of the genuine human instincts and needs within permissible limits.

Thus, to say that all music is forbidden in Islam does not seem to agree with the balanced approach of Islam to issues of human life and experience.

Traditions often cited by the first group scholars to justify condemnation of all musical instruments and music, according to some scholars, are considered as either spurious, or phrased in such way solely because of their associations with drinking, dancing, and sensuality.

As a matter of fact, we know from the authentic traditions that the Prophet (peace and blessings be upon him) not only allowed music in the weddings but also listened to girls singing.

While listening to girls singing on such an occasion, he interrupted them only once when they sang the following verse, “In our midst is a Prophet who knows what will happen tomorrow”; whence, the Prophet (peace be upon him) told them, “Cut this sentence out, and continue singing what you have been singing earlier.” (Ahmad and Ibn Sa`d)

There is nothing in the sources to indicate that the above permission is limited to the occasion of wedding, as some people tend to think.

In light of these, according to the last mentioned group of scholars, music that is deemed to be free of un-Islamic and unethical themes and messages, the same is true of musical instruments so long as they are not used for the above, have been considered as permissible.

But we have to stress that Islam does prohibit mixed dancing of males and females.