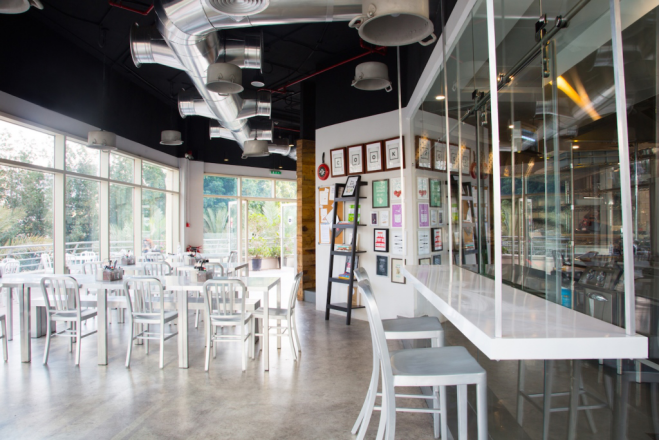 You could be forgiven for thinking that this little office, tucked away on the side of a Jumeirah Lakes Towers (JLT) in Dubai, is just another local takeaway joint. But once you step into the compact space, it’s all sun-drenched Silicon valley–style co-working space, with a bunch of people tapping away at their laptops. The sounds and smells emerging from the kitchen round the back, however, give away the venue’s culinary leanings. This is Kitchen Nation, the UAE’s first culinary incubator.

The burgeoning food-and-beverage industry in this region is undoubtedly one of the most exciting to be in, but it is also one of the most competitive. The last two-odd years have seen a spate of new, independent concepts and global trends—such as food trucks—emerging in the UAE, particularly in Dubai.

But as any entrepreneur will tell you, this journey can be expensive and riddled with difficulties and obstacles. When it comes to culinary startups, the main challenge lies in having a professional-grade kitchen, which comes at a huge cost and is simply not viable for those bootstrapping t

The genesis of Kitchen Nation lies in founder Rami Salous’s struggle to find a suitable kitchen space when he was starting a food truck business.

“Finding a small space was almost impossible, and renting a big space didn’t make sense. Thinking [that other] people must be facing the same issue or simply can’t yet afford to rent a fully equipped professional kitchen, I refurbished a kitchen in JLT, and Dubai’s first culinary incubator was born,” he explained.

Besides offering a fitted-out facility with professional kitchen staff, the team at Kitchen Nation can also offer consultancy services for the entire life cycle of setting up a food business, from menu development and costing to branding and marketing. Members can actually operate from the premises, offering menus for people to dine or order in. After an initial assessment, each member’s package is individually tailored, with monthly packages ranging from as little as AED 2,000 to AED 25,000 and even higher, depending on the requirements.

According to operations manager Paul Parik, himself a chef with a startup background, starting a food business in this region from a culinary incubator can slash startup investment to as little as 5 per cent of what it would cost to go it alone.

Rami said, “We provide them the opportunity to test the market and receive tangible experience as well as real-life data to make informed business decisions, without a long-term commitment and heavy financial investment. They benefit from the reduced operating costs, having a fitted out venue to work out of, as well as networking opportunities.”

“To be a food business here, it’s very complicated, unless you have half a million dirhams to spare!” she said. “This was the only opportunity for me to start operations in a professional kitchen, and it’s a fantastic platform. They are very flexible and supportive of new initiatives too.”

Clearly she is not alone, as Kitchen Nation is at capacity at the moment with over 15 members who, between them, offer a whole gamut of foodie offerings, ranging from authentic Jamaican cuisine and Mexican street food to sandwich catering services. It now has plans to expand soon, not just within Dubai and the UAE, but across the rest of the Middle East too.

While kitchen incubators are a well-established model in other great breeding grounds of culinary creativity such as New York and London, this is new territory for the Middle East. But judging by their success in less than a year of operations, there is clearly an appetite for creative, home-grown food concepts.