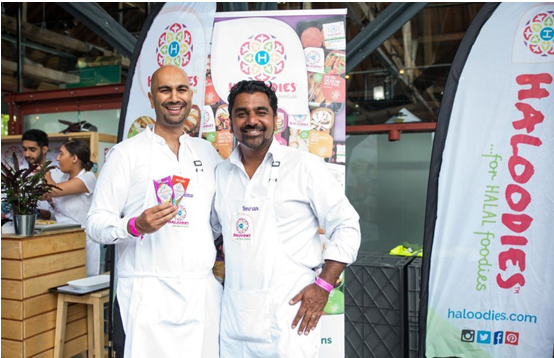 Since then, the mass migration of affluent Muslims to high-end dining options has proved them right.

Britain’s Muslims are getting wealthier. The average monthly income of those born locally, with at least one parent born in Britain, is £1,219, compared with £815 for those who arrived aged six or older, according to the Economist Intelligence Unit. And the growing number of converts – estimated at around 100,000 – like modern food that appeals to their old eating habits and new faith.

Khawaja says his firm is riding high on a surging demand for premium halal food. Haloodies (a portmanteau of ‘halal’ and ‘foodies’) is the UK’s first halal food brand to gain shelf space in nearly every mainstream supermarket chain.

The firm now has its fresh and pre-cooked meats ranges – including peri-peri chicken skewers, charcoal-cooked chicken fillets and protein snacks – in more than 600 stores across the country, including Amazon Fresh, Tesco, Sainsbury’s and Morrison’s.

“For example, when a consumer wants a potato chip, they think of McCain. McCain stands for quality, heritage, and consistency and we want all those qualities with Haloodies products. When a box of Haloodies products turns up, we want our customers to have that same feeling that they trust the product. At the moment, that does not really exist in the halal world,” Khawaja says.

Globally the halal food market is worth $2.5 trillion, according to the State of Global Islamic Economy Report from Thomson Reuters and Dinar Standard.

One of the major drivers behind this staggering figure is the rise of the ‘millennial Muslim’, says Khawaja. These are young people who have been born in the UK and are seeking to balance their fast-paced western lifestyles with a desire to respect Muslim values.

“Millennial halal consumers to want the same quality of food that non-Muslims have. It’s the same for overall lifestyle choices…  they want nice clothing and cars. Halal food is no different,” says Khawaja. “They [Muslim millennials] are cash rich, they have high-quality jobs now, they’re young and driven.”

Khawaja says that lifestyle messages now ‘transfer so quickly over the world’.

“Any trend that you think of, in a few hours, the whole world will know about it. With halal food, it’s the same. People want to try food from all over the world – these food festivals popping up everywhere. They see pictures of gourmet burgers and amazing desserts on Instagram and they think ‘I want that as well’.

“Demands need to be met. The millennials are demanding higher quality halal products and the suppliers and retailers are reacting,” he says.

The days when halal meat was mainly to be found languishing in old-fashioned butcher shops are long gone, says Kauser. He says, “Our core customer group is concerned about the general quality of halal products on the market and are actively seek out a brand they can trust.”

Khawaja attributes the success of Haloodies in part to its devotion to market research and taking steps to deeply understand their market.

“With other halal brands, they’re not necessarily run by people who are Muslim, they’re just offshoots of companies who supply into other markets. Halal is an add-on for them – it’s not the focus. For us it’s purely the focus, we are participants in that market ourselves.”

Khawaja notes that the single biggest differentiator for his company is the brand.

He says that Haloodies’ fresh and accessible international branding appeals to young Muslims and non-Muslims alike, as does the convenience factor of pre-cooked and pre-flavoured meats.

The founders rely on data insight to come up with new products in conjunction with their suppliers, DB Foods.

By the end of the year, Haloodies plans to expand its range into frozen gourmet burgers, adding to its popular ranges of pre-prepared chicken, fresh chicken and lamb.

Ultimately Haloodies’ founders are planning to create the world’s first truly global halal food company, with the help of their big-ticket financial backers, KKR. After the UK, the firm has its sights set on France, Germany, Malaysia, the Gulf and the US.

“The ultimate aim is to go international,” Khawaja says. “We have really long-term goals.”

Khawaja says the biggest challenge so far in growing Haloodies has been securing the investment. It’s also been an ongoing battle to convince retailers of the potential of the halal consumer, he says.

“But it’s been the most magical journey and – people don’t believe me when I say this – it is the most amazing feeling coming into the office every day. We’re always travelling and always on the move.

“We face day-to-day challenges all the time and we get over them because we’re all so driven and keep going. It’s a really massive undertaking, but we’ll get there.”