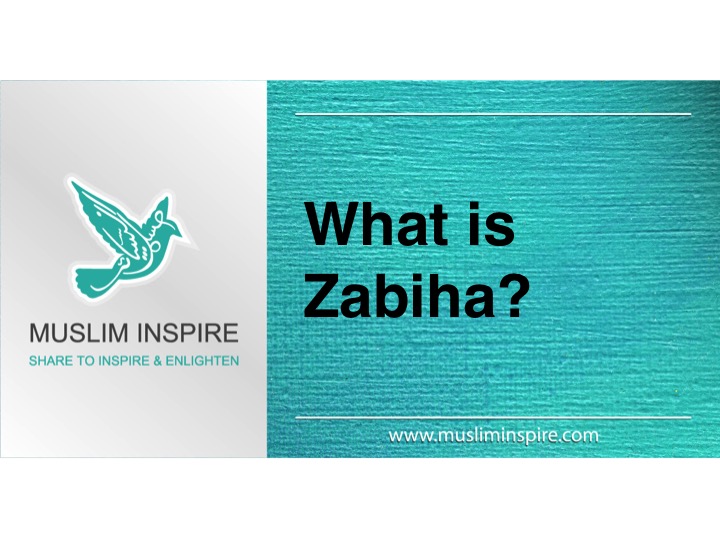 Zabiha is the Arabic term for the Islamic method of slaughter, derived from the Quran and Sunnah. A brief outline of the zabiha method is as follows:

Zabiha slaughter is believed to cause the least amount of pain to animals. It is important to perform the slaughter with respect and compassion. The slaughter is to be performed by an adult of sound mind, who may be Muslim, Jewish or Christian (People of the Book). Using a sharp knife, a swift, deep incision is made into the neck, cutting the jugular vein while reciting the Takbeer, i.e. Allah o Akbar (God is the Greatest). After exsanguination, all the blood is allowed to drain from the animal’s body. Thereafter, the meat may be cut as required.

Islamic dietary laws give a detailed account of the animals (along with birds, insects etc) that are permissible for Muslims to eat. All such animals are halal, the Arabic word meaning lawful. Anything unlawful is known as haraam.

Exceptions may be made where haraam can be consumed in a life threatening situation when halal is not available, but just enough so that the person can survive and be able to reach to a point where halal may be obtained. This is known as the law of necessity.

It is important to note the difference between halal and zabiha. Halal animals are the ones that Muslims are allowed to eat. However, all halal animals (except aquatic animals) must be slaughtered in the method prescribed, i.e. zabiha, before they are considered suitable for consumption by Muslims.

It is easy to get confused as ‘halal’ has become the colloquial word for zabiha today.

Kosher (derived from the Hebrew kashur, meaning fit) is the English term for food which is prepared in accordance with Jewish laws. Kashrut is the body of Jewish dietary laws, and sechita is the method of slaughter according to these laws. Kashrut is much stricter than Islamic dietary laws in the animals that may be eaten and in the rules of slaughter. There are very detailed requirements of the animal (it should have split hooves and chew its cud), place of slaughter, shochet (the ritual slaughterer), the knife to be used and so on.

What about Christian dietary laws?

Most Christians today do not follow the dietary laws of the Old Testament. Allah has clearly stated that Muslims may eat of what has been made lawful to Christians. But since most Christians consider these laws to be redundant, I don’t think this argument can be used by Muslims to eat everything that Christians eat. Pigs, for example, are strictly unlawful in Islam. Following this argument would mean that Muslims are allowed to eat absolutely everything, which they clearly are not.