Who was Prophet Muhammad (Peace Be Upon Him)? 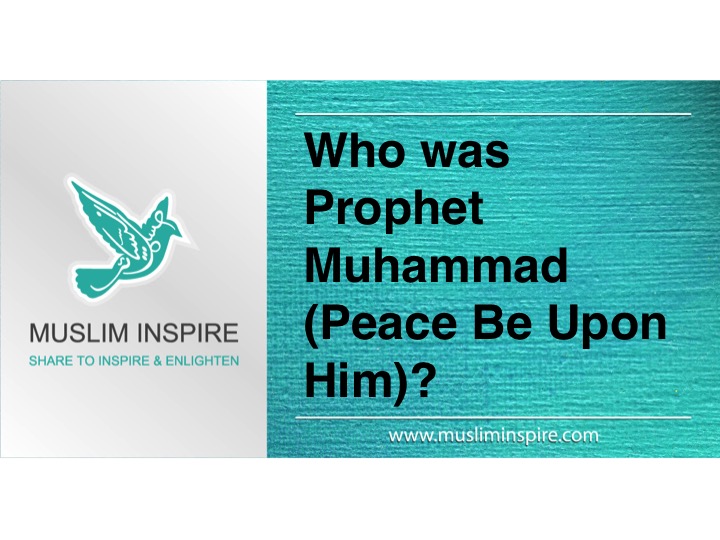 Who was Prophet Muhammad PBUH?

Prophet Muhammad PBUH was born in a noble tribe of Mecca in Arabia in the year 570 CE. His ancestry goes back to Prophet Ishmael, son of Prophet Abraham. His father died shortly before his birth and his mother died when he was six. He did not attend school and was thus unable to read and write. In accordance with the prevalent custom, he was raised first by a nurse, and then by his grandfather and uncle. As a young man, he was known as a righteous person, a trait that earned him the title of Al-Amin-the trustworthy. He often used to retire to meditate in a cave near Mecca. At age 40, he was given the prophethood when the angel, Gabriel, appeared in the cave with God’s Command. Subsequently, the revelations came over 23 years and were compiled in the form of a book called the Qur’an which Muslims consider as the final and the last word of God given to humankind. The Qur’an has been preserved in its original form and confirms the truth in the Torah, the Psalms, and the Gospel.

Why do we use the words (Peace Be Upon Him) or (PBUH) after the Prophet Muhammad’sname?

When writing the name of the Prophet Muhammad, Muslims often follow it with the abbreviation “PBUH.” These letters stand for the English words ” peace be upon him.” Muslims use these words to show respect to one of God’s Prophets when mentioning his name. It is also abbreviated as “SAWS,” which stand for the Arabic words of similar meaning (“sallallahu alayhi wa salaam”).

Some Muslims don’t believe in abbreviating these words or even find it offensive to do so. The Quran instructs believers to wish blessings upon the Prophet, and be respectful in addressing him, in the following verse:

Those in favour of abbreviation feel that it is too cumbersome to write or say the full phrase after every mention of the Prophet’s name, and if the blessing is said once at the beginning it is sufficient. They argue that repeating the phrase breaks the flow of conversation or reading and distracts from the meaning of what is being communicated. Others disagree and insist that the Quran instructs very clearly that the full blessings be recited or written at each mention of the Prophet’s name.

In practice, when the name of the Prophet Muhammad has spoken aloud, Muslims will usually recite the words of salutation quietly to themselves. In writing, most people refrain from writing the entire full salutation at every mention of his name. Rather, they will either write the full blessing out once in the beginning and then write a footnote about it without further repetition. Or they will abbreviate using the English (PBUH) or Arabic (SAWS) letters, or a version of these words in Arabic calligraphy script.